Art that Makes you Squirm

It is not uncommon for artists to create work that aspires to disturb. And I believe this is a worthy impulse. Much of what we encounter from day to day does not move us. Often things that should move us do not, because we're used to hearing about such-and-such number of deaths as bombs blast some faraway land, or about the young lives cut short by a traffic accident on the highway a few miles away, or about the little child in the neighborhood, or related to a coworker, stricken by the terrible disease for which there is no cure. Always we are surrounded by suffering and pain, yet it is human nature to limit just how much we feel. It is good and adaptive. It gets us through our days. It keeps us productive. But to be human, we must do more than get through days and be productive; we must feel, even when it's inconvenient. One of the most important things that art can do is snap us out of our platitudes and euphemisms, even if just for a short time, and make us look at the naked reality of our lives: the fragility, the unfairness, the pain, the truth.


It is not uncommon for artists to create work that aspires to disturb. But it is very rare that I am disturbed.


The exception to this is Janis Brothers. Janis Brothers is an artist who is from and who works in rural North Florida, and, she told me, she worries that others won't get her work, that it doesn't have a universal appeal, because it is so personal to her. Brothers' art preserves and recreates the tragedies she's witnessed and suffered from, true, but just as a small town in the hands of William Faulkner can seem to contain the world, so can a single tragic car accident in the hands of Janis Brothers seem to crystalize the universal emotions, and questions, that we all experience in the face of death.


And none of us are untouched by death. You might just manage to dodge paying taxes, but death? It is the ultimate universal topic; the paradox is that every death is supremely individual. I have not yet seen one of Brothers' installations in person, but I had the opportunity to see images of her work, and to talk to her about it, and now she is the only artist who comes to mind whose installations I both fear and deeply desire seeing. 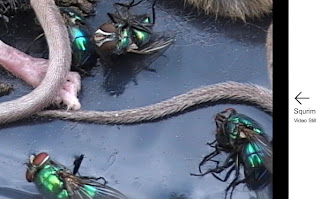 To me, the most disturbing project Brothers has shown is a film called "Squirm," an apt description both of the content of the video and the reaction it will evoke. Squirm shows a collection of dead mice stuck to a glue trap, surrounded by flies, as one last mouse struggles for survival and ultimately succumbs.


Now I know what you're thinking: that's gruesome. Yes. But mousetraps are a big business in this world, and with good reason. Drive down any street in America and you are passing houses where rodents are being trapped and killed. It's a matter of what we choose to look at and what we choose to ignore.


Brothers found the opportunity striking because of the connection she made between the struggles of the mouse and a tragic car accident she'd witnessed. I'd like to quote her directly:


When I saw that one mouse was still alive but stuck to the trap, I decided to film it even though I did not have a particular plan as to how I might use the footage.  To remove the mouse would have been impossible.

In review, the struggle was similar to the experience I encountered with Cleansing, a reaction to the experience of witnessing a car accident.  All four of the passengers died.  The crash was so severe, the car had to be cut away to remove the victims.  The struggle to hang onto life only to die is a tragedy and very difficult to witness.

The video of the dying mouse reminds me of the films I've seen lately (Fast Food Nation, Temple Grandin) where they show cows being slaughtered. No one likes this. Many look away. But those deaths are frequent realities we seem, as a people, in no hurry to stop. And we know, as a people, that we could save human lives by (for example) outlawing cell phones in cars and lowering speed limits, but we don't. We like to drive fast and talk on the phone. So some must die. We allow it. Why don't we feel this?


Tonight, while Brian and I were taking the lawn waste to the curb, we heard a series of screeches and bangs. Because I grew up on a busy street, I consider my familiarity with the sounds of car crashes better than average. "That's a bad one," I said right away. "They got several cars with that one." We walked out to the intersection (so did several dozen other people, by the way -- the first time I've seen most of my neighbors!) and there was one small Toyota terribly mangled, struck from several directions. Three larger trucks had their front ends smashed in. We watched for a moment, the emergency vehicles came, and we turned and went home. I told a joke, and he laughed. What could we do? Accidents happen... all the time.


So yes, Squirm shows mouse death, but Cleansing is about the deaths of four human beings. I'm posting some stills from these pieces, but I encourage you to go to Janis Brothers' website and look around. Here are just a few photos: 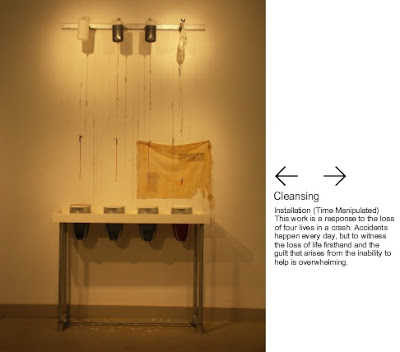 This picture shows the medical equipment, and we get a sense of the four individual lives lost from the four stations. 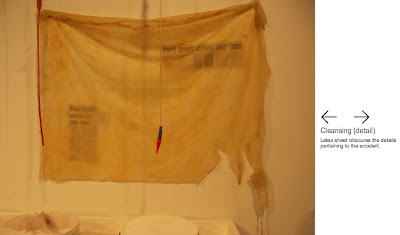 This detail (latex obscures the news clippings, but not so much that you can't read them) shows that four were killed in a fiery crash -- the same kind of article we see all the time and usually think little of, the kind of information that does little more than put a barrier between us and the horror, the tragedy of the event. 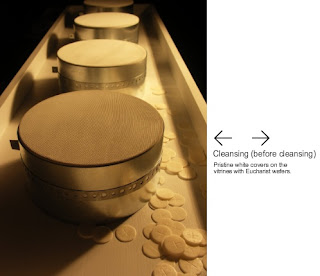 The medical equipment drips its blood into religious vessels: vitrines covered with pristine cloth and communion wafers. The transmission of the blood from the medically to the religiously symbolic vessels is particularly meaningful I think, and says more than words can. 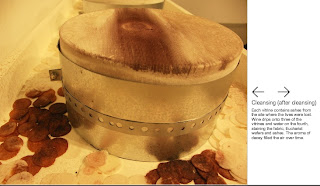 After the exhibition, the vitrines and wafers are permanently transformed, destroyed, bloodied.


What I love about this piece is its layers: the news layer, the medical layer, the religious layer, the way the pristine thing is transformed/destroyed by the blood/wine while the news article with its emotional distance and professional tone is kept at bay behind latex, its words visible but muted while the things themselves enact the deaths -- that one-way movement through time -- the taking of a person with flesh and blood and hope and need and desire and fear and destiny down, via this destruction, to simply the blood and flesh.


We have all lost people. I have lost people. Each of those deaths was individual, an event indivisible from the unique person whose life was lost. You can no more generalize about death than you can generalize about people. And I think that's why Brothers' art really works for me, why I feel she's managed to transform the personal into the universal -- her work is careful and respectful, and she never loses sight of the individual who lived and was lost. And through that care and respect and clarity of vision, she makes us feel that moment, that universal sense of loss and tragedy. The unwanted that came. The desperate desire to just reverse that one thing that happened whose consequences were so outsized, so awful, so beyond comprehension -- and so utterly irreversible.


And I both love it and am left profoundly unsettled. But it is an unsettling that I want to feel, because this is life, and it is too important not to.


Brothers also has a piece on sex offenders that would surely chill even the most hardened heart, but I would like to stop with these two pieces, and encourage you to view more on her website.

This is the third in my series on Florida Artists, especially the ones I just met. Previous posts here and here. Cross-posted to The Electronic Girl.