Meet Gladys, our latest cat. We've had her for about 3 months now, I guess, maybe slightly longer, and hers is an interesting story. 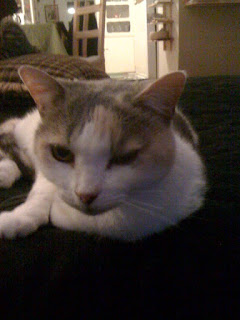 We've mentioned before that there's a problem with feral cats in our neighborhood. In the eight months we've lived here, we've captured and fixed six cats, and adopted or found homes for three. The other three aren't tameable, so they live in the back yard along with a couple who are smart enough to avoid our trap, and we feed them and try to care for them as much as we can. We've even named them, and we consider them to be our pets (as far as the legal system is concerned).

And then there's Gladys.

Amy was feeding the outside cats one morning and heard something that sounded like a cross between a groan and a demand. It was on the other side of the fence, and when she opened it, Gladys walked right past her and to one of the food bowls and started eating. The outside cats treated her like she was diseased or something, and honestly, she looked it. Her hind legs were wobbly, she was bone-thin, and she was covered in dirt.

Later on, Amy opened the front door to our Florida room, and Gladys walked in like she owned the place. She'd been a house cat--that was obvious. But we didn't know what kind of shape she was in. We put together a bed for her, some food and water, a litter box, gave her a combing and then thought about it. She looked ancient, and was so malnourished we weren't sure if she'd survive. Even our vet said he didn't know how old she was, but she was missing at least one front tooth and had whip worms, which meant that she'd been so hungry she'd eaten feces at some point.

And she was crabby as well. She loved (and still does) sitting on laps, but doesn't want to be petted for a long time, and if you persist in doing it, she'll take a swipe at you. We suspect she was abused by her last owner, and I think probably by a woman, because Amy's more likely to get swiped at than I am. She was extremely defensive around our other cats, though they're starting to get along better now (by which I mean there's less hissing now around the food bowls than there once was). In fact, when I took that picture, she was on the futon with two of the other cats. They'll probably never cuddle up together, but at least the hostility is disappearing.

We have no idea how old she is or how long she lived on her own. We think she probably has a cataract and some hearing problems too. But her hind legs have filled out and she's gotten more spry since we moved her indoors and she has more room to move around. She's our fourth cat, which is one more than we ever wanted to have. But she's a part of the family now, so expect to see the occasional photo on here or Facebook.