When are y'all going to learn? 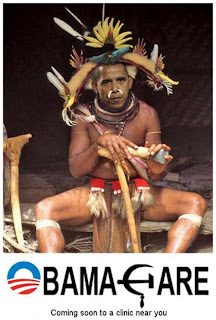 There are a fair number of Republicans and conservatives who see the above picture and get pissed off, because they're not personally racist and they don't want their party to be racist. They might even be in the majority of their party or movement, though that's way iffier a proposition. What they are not, however, is in control of the image of the Republican party.

It's one thing when a random blogger, or worse, a commenter goes off on a hate-filled racist rampage--it's another when it's someone who's got some profile in the party. Dr. David McKalip is the genius who forwarded the above image to his buddies on a google listserv--who's he?

He's also an energetic conservative opponent of health-care reform. McKalip founded the anti-reform group Doctors For Patient Freedom, as well as what seems to be a now defunct group called Cut Taxes Now. Last month he joined GOP congressmen Tom Price and Phil Gingrey, among others, for a virtual town hall to warn about the coming "government takeover of medicine."

This picture is nothing new--it's the same old racist crap recycled for a new campaign. The bone in the nose does double duty here--it's calling out to both racists and birthers--and the hammer & sickle is classic commie-baiting (which worked so well in the general election).

The really sad thing here is that there are legitimate arguments to be made opposing health care reforms--I don't think they're persuasive and I think they generally smack of "Let them eat cake" quality empathy, but they are out there to be made. They don't make much sense to me--on the one hand, free marketeers claim government can never do anything as efficiently as private industry can, but on the other, they oppose a public option because the government would be able to undercut private industry. How's that work again?

But obviously, photoshopping Barack Obama's face onto a picture of a tribesman and calling him a commie isn't a legitimate argument, nor is it likely to be a winning one. If this is the tack the opposition is going to take, we'll be installing the French system in early 2010.

One last thing to the non-racist Republicans out there. If you're not going to kick the racists out of your party, then at the very least, you might want to explain to them that there really is no such thing as a private email. It might cut down on the embarrassment a little.