As part of her "Assvertising" series, Melissa McEwan passes along this gem from Burger King. 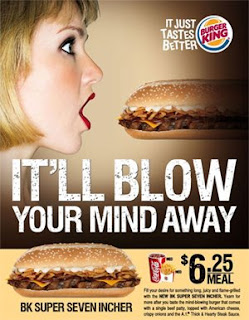 Melissa has this to say:

Which is all absolutely correct. I'd just like to point out one other problem with the concept of the ad, and why I think it's going to fail.

Now, it seems pretty clear that the intent of the ad is to put a guy's waist in that dark area on the left side of the ad, but think for a second who this meal is meant to appeal to. Guys, right? Probably younger guys who think that eating a seven-inch long cheeseburger on a hoagie bun is the sort of thing a manly-man does. But how long is it going to take before one of those self-same doodz rags on one who bought the thing about taking a big seven-incher in the mouth like that? Then it's gay jokes for the next ten hours and none of the other doodz in the group will ever buy one when they're in a group.

But that's who Burger King is counting on buying these things. They're like cigarette companies--hook them while they're young and they'll come back for the bullshit salads when they're in their thirties and trying to lose the freshman thirty they put on by eating that crap in the first place.

I give this ad run a month at the outside, not because Burger King will be ashamed of it--as Melissa points out, they're apparently incapable of shame--but because it will backfire on them.