So, it looks like I've nearly wrapped things up with graduate school in Florida. I am now your humble blog contributor typing away in cool and windy Illinois. And here is the word for this Saturday night: potboiler.

'"All men who have to live by their labour have their pot-boilers," Hazlitt wrote, and an obscure English poet lamented: ' far'vring patrons have I got,/But just enough to boil the pot.' A potboiler is of course a literary work written to make a living, a task performed to keep the pot boiling, or to eat. Financial gain is the only object in writing one, but sometimes genius transcends the immediate object and the result is a work of art. Dr. Johnson's "philosophical romance" Rasselas (1759), for example, was written over the nights of one week to meet the cost of his mother's funeral and pay off her debts. Coleridge's Ancient Mariner has been called "the most sublime of pot-boilers to be found in all literature," but I suspect there are even greater ones. In telling of the birth of Sanctuary (1931), William Faulkner observed that he was hungry. '[I began] to think of books in terms of possible money," he recollected. 'I took a little time out, and speculated what a person in Mississippi would believe to be current trends, chose what I thought was the right answer and invented the most horrific tale could imagine and wrote it in about three weeks.'" (From The Fact on File Encyclopedia of Word and Phrase Origins)

Also, a photo. This is from a few days ago, as seen from my backyard. 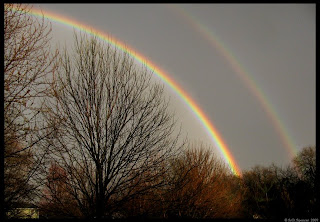