Did Michelle Malkin just admit she hangs out with nutballs?

That Michelle Malkin is a right-wing psycho is not a secret, but she tries to maintain a veneer of respectability, and a few allies on the right side of the corporate media help her to maintain that illusion. So it's with some amusement that I see she's defending herself after taking a picture with a guy holding a sign that links President Obama to Adolf Hitler by basically saying left-wing nutballs did it to Bush.

Let me clue you in on something, Ms. Malkin--those people who compared Bush to Hitler? They were the nutballs. They weren't the mainstream of liberal thinking over the last 8 years. They were the people that the activist community--the nutroots, as you refer to them--were constantly telling to shut up because they weren't helping. I mean, the example that most right-wingers like to cite in this argument are the two commercials that morphed Bush into Hitler that were entered into MoveOn's contest. Remember--MoveOn is supposed to be the embodiment of left-wing nutjobbery, and those commercials were voted down by the membership of the community. That's hardly an embracing of the comparison.

But you seem to be embracing, if not the comparison, at least the people who are making it. 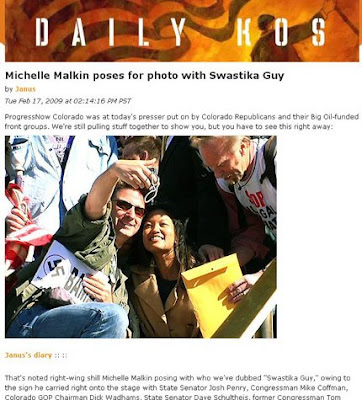