but a lot of locals did. Here are a few of the pictures I took of the various signs. A friend is supposed to email me with some more and when I get them, I'll dump them into a big Flickr album and link to them as well. I'd estimate the crowd at about a hundred, maybe slightly more, pulled from various local groups and gay-straight alliances, all cheery and united. 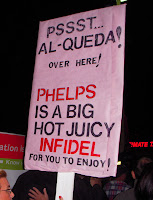 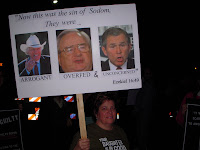 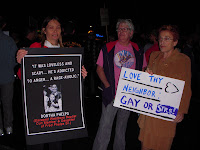 I got to meet Anthony Neidweicki, local candidate for Oakland Park City Commission while I was there--wish I could vote for him, but I don't live in the area. You might not recognize the name, but you probably recognize this story. He and his now-husband were waiting for their bags at the Fort Lauderdale airport late one night when they and everyone else in the airport were informed, via the intercom, that "A man who lies with another man as he would a woman is subject to death." Niedwiecki didn't much appreciate it and got the airport to investigate. He and his husband, Waymon Hudson are both very involved in local and state-wide politics--Hudson formed Fight Out Loud and worked a great deal on the attempt to defeat Amendment 2 last year. They're both good people and indicative of the kind of community I live in.