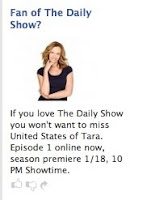 Most of the time, I don't pay much attention to ads, especially on the web (though if readers wouldn't mind clicking on my ads from time to time, I'd appreciate it. I might get a google check one day if you do.), but every once in a while, I see one that just makes me scratch my head and wonder about the reason for it.

This is one of those ads, found on Facebook. It's for a new show on Showtime starring Toni Collette, and I only know that much because I've seen other ads for the show in other media. It's the text that has me wondering. "If you love the Daily Show, you won't want to miss United States of Tara" it says. Why? I love the Daily Show because it's an acerbic take on the media, and because Jon Stewart does an incredible job playing the straight man to the news media's buffoon. I love it because it's grounded in the real world, and talks about news stories I've been following.

United States of Tara, however, is apparently about a woman with dissociative identity disorder. I don't get the connection.

I suspect there isn't one, other than in the mind of the lazy ad-writer who put this thing together. "We need an ad for the web, which means for kids. What do the kids like? That Daily Show! They're all over that Daily Show thing. Yeah! We'll just say our show is like that one and put it on that Facebook thing. We'll be reeling them in!" I'm guessing those people went to the Underpants Gnomes School of Business.