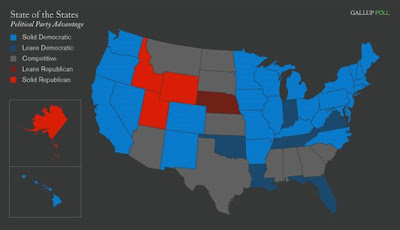 Just kidding. Actually, they know exactly what they're doing, and if you tell them it's a mistake, they'll just claim to be sticking to their principles... which is funny coming from a blank-check-for-Bush batch of legislators who now claim that the problem with Bush was that he "behaved like a Democrat." If he behaved in a way you find reprehensible (because of your "principles"), why the lock-step loyalty?

(Ron Paul, on CSPAN this morning, claimed that Bush I, Bush II, and Ronald Reagan all "acted like Democrats," creating huge deficits and expanding government -- but don't the last three Republican presidents over the last three decades DEFINE what the Republican party is? How can they be the exception when they are the party?)

But that's the problem with the Republican party: it is such a blindingly partisan party that its only real principle IS loyalty. Its ability to march in lockstep gives it many advantages: the ability to communicate a loud, pervasive, effective message (true or not), the ability to act swiftly to change things when it's in power; the ability for its leaders to state and do questionable things without being questioned by underlings or peers -- only "outsiders." But there are disadvantages as well, especially lately.

The two major American parties are similar in a lot of ways, but their weaknesses are opposite. The Democratic party is too compromising, too milquetoast, too frightened to make bold moves, even when on the side of right. The Republican party, on the other hand, is utterly incapable of compromise, is too arrogant, and too eager to make bold moves, even when they're completely wrong. A proper leader (or person) should avoid either extreme, but natural systems create feedback loops, and exaggerate the qualities of its constituent parts.

So now, when the entire country has rejected Republican ideas and has embraced Barack Obama, the Republican party has further united to not vote for the stimulus plan with Obama's name on it. (Bush's name, yes -- Obama's name, no). They did this knowing that the plan would pass anyway. They're doing it for show: to make a statement. To show that they will not compromise, they are right dammit, and they will act boldly, no matter the cost!

But here is the gamble: the stimulus package did pass the House, and will pass the Senate, and will be signed by the president. The Republican party just bet its reputation on that package's failure. If the economy improves, and people perceive that the stimulus package helped, then the fact that not a single Republican voted for it becomes a symbol of how partisan and party-before-country they have become, and will further reduce their popularity.

And what might be gained? If the stimulus package fails and the economy continues to worsen, no one will believe "oh, had you followed our Republican ways things would have been better!" It was the Bush years that led to the crisis in the minds of most -- so if the package fails their reputation will continue to be mud.

This is a difference of kind in comparison to Democrats: Democrats are squishy and complex (often a great failing of theirs); when Democrats disagree with a policy -- say, invading Iraq -- they nonetheless lift a finger to the wind and behave in a politic way. They haven't the unity nor the imagination to try to f* up things and make the policy fail (by, say, failing to fund the war in order to stop it -- something their constituents wanted them to do). No, the Democrats put their country first and decry any move that would create "rifts" and create a poisonously partisan environment.

On a purely political basis, they're making a mistake. The mood of The People is not entertained by ideological speeches and empty gestures, and people everywhere at every income level are suffering. People want results.