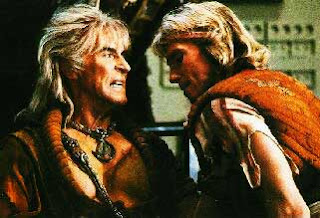 Khan is dead. The only actor to truly go head to head with William Shatner in a full on emote-a-thon, complete with awkward pauses and everything but winks at the camera during takes has died.

I remember seeing an A&E Biography about Ricardo Montalban a few years ago, back when A&E showed something other than Dog the Bounty Hunter, and he lived a fascinating life. He was one of the first Mexican-born acting stars, and was instrumental in founding Nosotros, an organization dedicated to promoting Latino involvement and image in the film industry. That takes guts to do when the general attitude toward you is that you ought to take what's offered and stay quiet. I remember Montalban speaking about it in the Biography piece, and his response to the effect that it was something he had to do. I liked him as an actor, but respected him as a person for that.