Check out this article at Sciam.Com with 7 different maps showing the presidential election results. My favorite is also the most processed: this is a county-by-county reflection of how "blue" (Obama) or how "red" (McCain) people voted, using shades of purple to show the degree. (For example, a 60-40 win for Obama will show as a bluer shade of purple than an outright 50-50 split.) The counties have also been resized to reflect their population, instead of their land area. The standard state-by-state all-red or all-blue geographically-sized electoral map gives many false impressions: it implies uniformity of views in states, it suggests battle-lines being drawn between parts of the country, and it suggests that vast swaths of American farmland and forest is full of McCain voters (instead of non-voting boar and squirrel). So while this view takes some getting used to, it better represents the human reality. 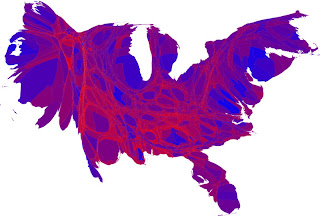 Some kind of fun things I noticed: the San Francisco Bay Area is HUGE, even compared to the rest of California. There are many voters there. Same is true of the out-sized Florida and the super-huge Northeast. You can see Broward County (us) in Florida is bluer than either Miami-Dade or Palm Beach counties, to our South and North, but only by about a shade. By this view, Texas is tiny.
One other thing, and I don't know what to make of this: the map appears as streaks of red over a base of blue, rather than as spots of blue laid on a base of red. I'm guessing this is because the blue tends to be centered, major cities and metropolitan areas, while the red runs in streaks, suburbs, exurbs, and rural communities along highways and interstates. It gives the map the appearance of a blue country caught in an unfortunate red web.