Let's see if we can find an equivalent to this at one of Obama's rallies, shall we? 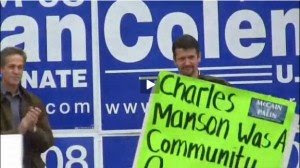 Via Balloon Juice, that's a picture of Todd Palin aka the First Dude with Minnesota Senator Norm Coleman, and yes, he's holding a sign that says "Charles Manson was a Community Organizer," an obvious swipe at Barack Obama. I think a couple of Senators have some questions to answer--both Senator Coleman and Senator McCain. Do either of you subscribe to this comparison? Is Charles Manson a legitimate comparison to Barack Obama? It's fair to say that Todd Palin thinks so, seeing as he's holding the sign. Norm Coleman is applauding, so I guess he's down with it.

Update: Looking closer at the picture, it seems Palin probably isn't holding it--it's just the way the picture was framed that makes it look that way at first glance. My apologies. However, it is still an indication of the kind of thinking that's going on at Republican rallies, and that has spilled over into non-Presidential gatherings.

What about it, Senator McCain? That's the husband of your running mate, after all, and he's inserted himself into this fracas, going so far as to say "I’m just glad to be a part of the McCain/Palin ticket and help out wherever I can." Is Todd Palin part of the ticket? Does he speak for you?

John Cole posted that along with another example of cause and effect--excite that kind of emotion, and you should expect that kind of reaction. For another lesson, here's Pam posting Greensboro reporter Joe Killian's experiences at a McCain/Palin rally in North Carolina today.

The man began to say something about how of course I was interviewing the Obama people when suddenly, from behind us, the sound of a pro-Obama rap song came blaring out of the windows of a dorm building. We all turned our heads to see Obama signs in the windows.

This was met with curses, screams and chants of “U.S.A” by McCain-Palin folks who crowded under the windows trying to drown it out and yell at the person playing the stereo.

It was a moment of levity in an otherwise very tense situation and so I let out a gentle chuckle and shook my head.

And then he kicked the back of my leg, buckling my right knee and sending me sprawling onto the ground.

So much for trying to calm the crowds, huh? Senator McCain's hyperbolic statements about Obama and ACORN and William Ayers are bearing fruit, and for all the claims that he's heard similar stuff at Obama rallies, he has yet to come up with a single instance approaching this level of garbage.

We still have just over two weeks to go, Senator. That's how long you have to distance yourself from this kind of crap.