I last wrote about this exhibit a month ago, but I stopped by Thursday since it's scheduled to close on November 1 because some of my students had sent me photos that told me there was new stuff in the exhibit.

When the exhibit opened, Sarah Palin had been the Republican VP nominee for about three days, so the people putting together the exhibit hadn't had a chance to collect any stuff on her yet. It didn't take them long. Here are a couple of examples of Palin merchandise. 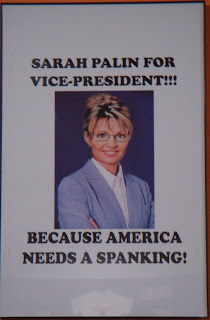 So this is pretty straightforward--Sarah Palin is the schoolteacher/mom figure out to administer some badly needed discipline to a naughty country. It's dismissive of her position as the governor of a state because it reduces her to a sexualized image of a fantasy woman who is going to take charge until you (as a man) give her the safe word and put her in her place like she wants you to.

This one is even more blatant. 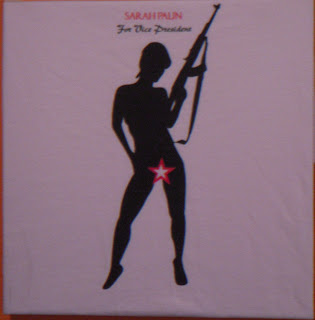 This one hits lots of right-wing points. The silhouette is reminiscent of the kind found on truckers' mudflaps with the logo "gas, grass or ass--nobody rides for free," and the semi-automatic weapon appeals to various demographic groups: gun owners, hunters, survivalists. The one thing they all share is the desire for a fantasy woman who can fire a gun while looking sexy.

This last example was there the last time, but I didn't get a picture. This is a perfect example of how a message can fail really badly.

The whole point of a bumper sticker is get a message across quickly, because you don't really want someone riding your ass at 50 mph while trying to figure out exactly what you're trying to convey. Amy and I, along with a group of others at the exhibit, were puzzled by this one for the longest. (If you got it right away, please don't shame me.) It says "I love country music." Get it? Because Hillary Clinton is a cunt, obviously.

The interesting thing about all these images is that they seem to be directed at the same group of people--neanderthal males who either want to be dominated by a gun-wielding VPILF (yeah, that was on display as well) or who are terrified of Hillary Clinton and try to compensate by calling her names. The one piece that looked like it was aimed at the political left was a bumper sticker that used the McCain/Palin background and styling and said "Old Fart - Bimbo." That was the only Palin piece that treated her sexuality as a negative--every other piece was one that glorified her sexuality, as though she were going to be asking every eligible male in the country into the VP's office for a special personal interview.

It would be easy to ignore this stuff--Palin plays up her looks, winks and flirts with the audience, and generally stands against everything that most feminists hold dear. But she has to be defended anyway because, as Melissa McEwan says in her Palin Sexism Watch series, "We defend Sarah Palin against misogynist smears not because we endorse her or her politics, but because that's how feminism works."