Hillary Clinton and the Political Circus

When I started this blog series about three weeks ago, I planned to do a couple of quick posts, but other issues got in the way. They're still in the way, but if I don't do this now, I won't get to it, and with Campbell Brown's righteous rant thrusting sexism back into the spotlight, even for a moment, I felt it was a good time to talk about some of these images.

The collection had more sexist than racist images in it. Part of that is no doubt due to the unreasoning, visceral hatred that the right-wing has for Hillary Clinton expressing itself in sexist ways, but it also has a lot to do, I think, with the fact that sexism is still more socially acceptable than racism is now. There's no contest on this, by the way--people who refer to themselves as progressives will say sexist things or buy into sexist memes that would make them blanch if the subject were a man of color.

But the images that came out during this election cycle were largely from right-wingers, so they tended to fall into a few basic categories: 1) Clinton as male/lesbian; 2) Clinton as emasculating woman; 3) Clinton as sexually unattractive (which informs some of the right's love of Sarah Palin); 4) Clinton stepping out of her assigned role as woman. There's also a set that just wishes to visit violence upon her. 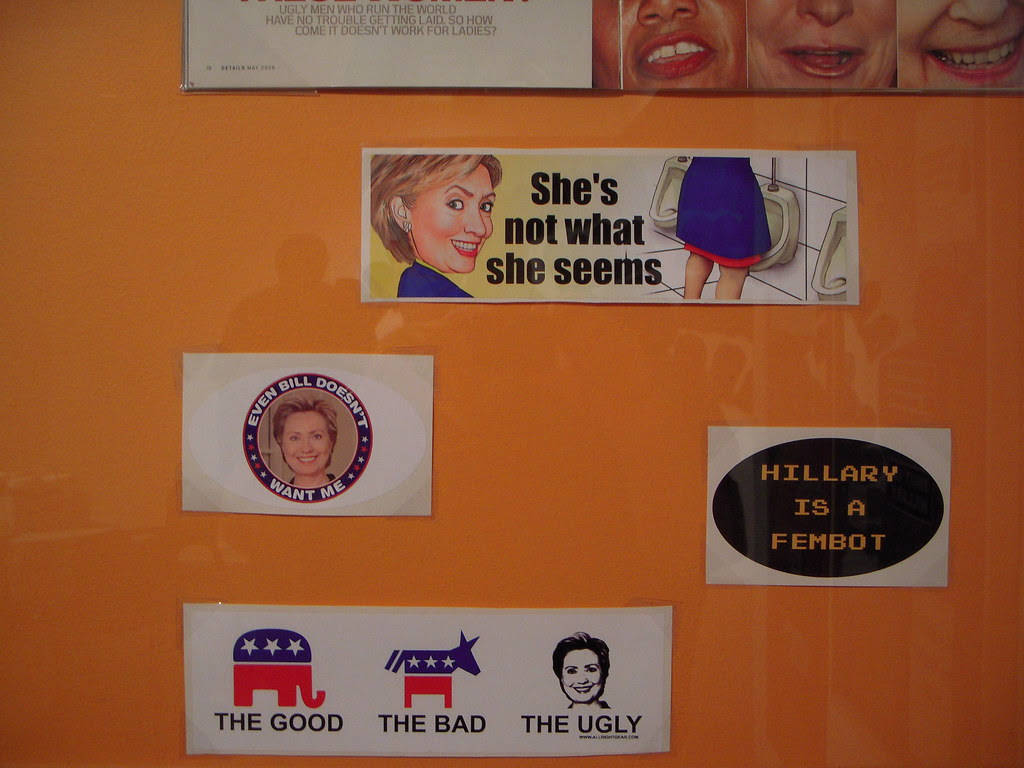 In this first set of images, I think we have examples of 1, 3 and 4. I'm assuming that the "Hillary is a Fembot" is meant more to paint her as unfeeling than as a sexually attractive sex doll with guns in her boobs. 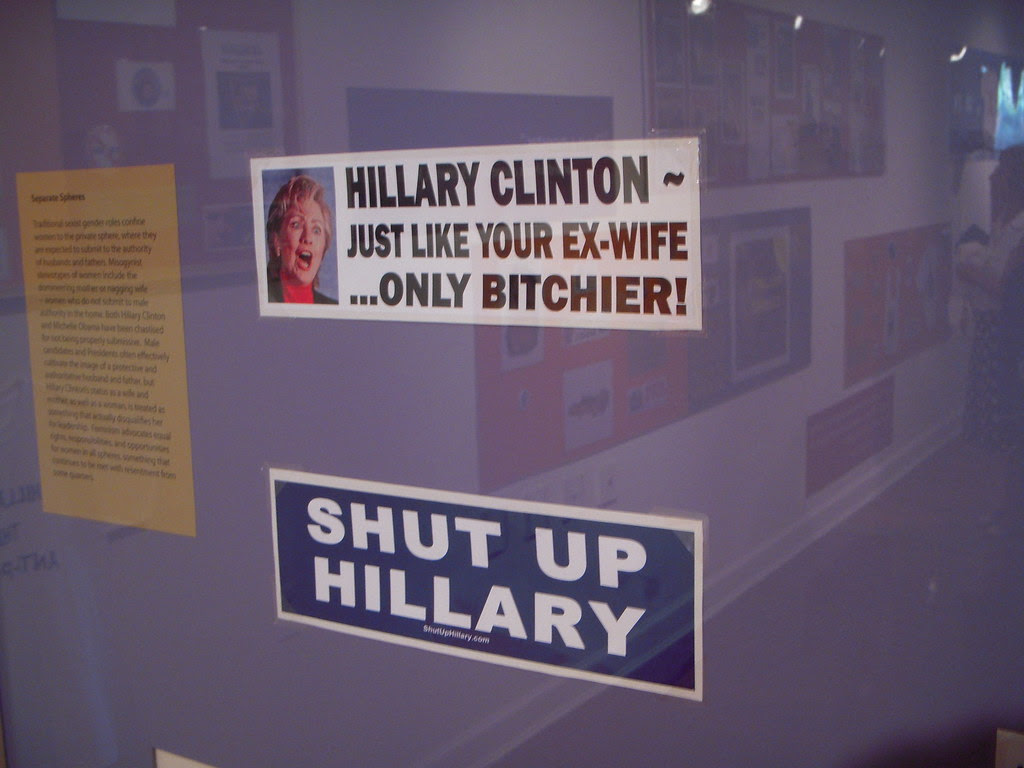 I think these two are examples of number 2. The first obviously plays to the group of men who have been divorced, most likely because their wivesgot tired of putting up with their shit. These men feel entitled to a dinner-cooking, house-cleaning, child-rearing fucktoy, and when women decide they'd rather do anything else but stay married, they become bitches. Hillary Clinton would presumably have become bitch-in-chief. The second image could also be a number 4, because it plays into the notion that women don't have anything to say that's worth listening to, since that's the man's job in this world. 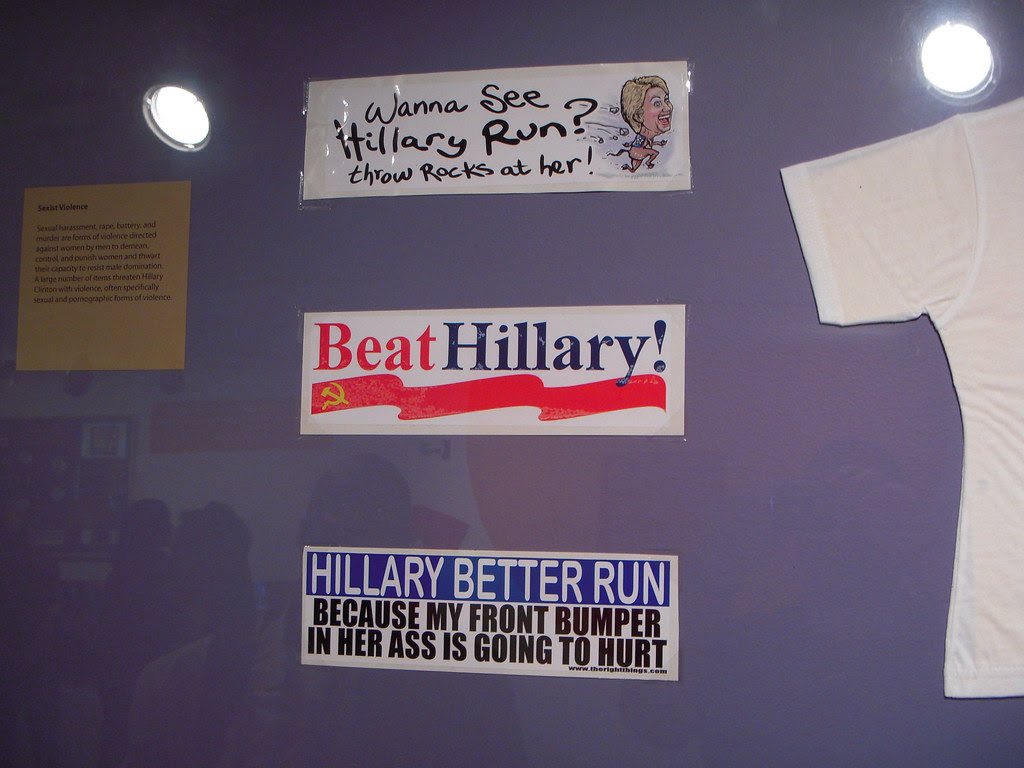 And then these are the ones that wish violence on her. There's a sick glee to these images, and I think it comes from the same attitude that the last set comes from. Senator Clinton's success proves to all women who are stuck with inadequate, hateful men that they don't have to be stuck with them. She's become a very powerful person, more powerful than her husband is these days, and that scares the hell out of these men who can't stand the idea of losing their dominance.

That's why Sarah Palin appeals to these men. Her husband is manly, studly, and the impression that comes from every news story that shows he was intimately involved in the day-to-day of her mayoralty and governorship reinforces the idea that she's really just a figurehead, that she takes orders from him.

The collection is still up, and will be through November 1, on the FAU campus in Boca Raton, the Ritter Gallery. I've really only scratched the surface in this series. Go check it out if you're in the area.