Dumb statement of the day and the Random Genius Ten 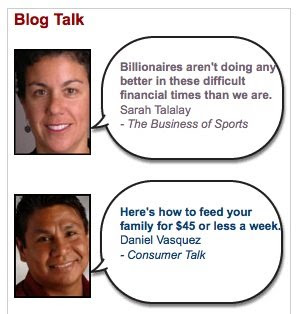 "So, billionaires aren’t doing any better in these difficult financial times than we are, according to Forbes, which released its list of 400 richest Americans today."

That's from Sarah Talalay's blog--she's a reporter who focuses on things like sports deals and stadium finance, which is why the rest of her post talks about local sports team owners and how they moved up and down on the list. The image is from the front page of today's Sun-Sentinel, and I grabbed it because it seemed so incongruous. I get her point--that the wealthy didn't really increase their wealth in the past year--but it seems really tone-deaf to me to suggest that they're not doing any better than we are. Maybe that has something to do with the fact that I'm still a week from payday and am effectively broke, and won't be doing much better once payday comes. Maybe it has something to do with the fact that my car--a two-door, 1999 Hyundai Accent--doesn't have one fully-functioning door handle and that's not likely to change anytime soon. And I know it has a lot to do with the fact that while I'm sitting here grousing about the situation, there are a whole lot of people a whole lot worse off than I am, financially speaking. All I'm asking is that you choose your words with a little more care, even if it is a blog post.

Here's the Random Genius Ten--for the moment, I'm taking advantage of iTunes' new Genius button and creating a list based on the next song to come up on my party shuffle. It reduces the wild swings in musical type, but makes it far more likely that "I Ran" by A Flock of Seagulls will come up. That song seems to go with everything, at least according to iTunes. Here we go.

Wow. That's the whitest list I've had in a long time. I may have to go back to the old way if this keeps up. Leave your lists in comments.