I understand that you consider yourself quite the political expert, especially when it comes to winning races for Democrats in the rural south, but personally, I have to go with Oliver here and say I hope you never get another job working for a Democrat. I mean, it's bad enough that you've nicknamed yourself after what is considered by most southerners to be a useless fish, so nasty that you can't even fry the shit taste out of it--yeah, that's what the "mud" in mudcat is; those fish are bottom feeders, much like yourself--and that you act like southerners in general are ignorant and proud of it. But you live the stereotype, and when you do it like this, well, you make me your proud enemy.

You see, Mudcat, I take this kind of stuff personally. I've written about the blight that the Confederate Battle Flag represents to my native south, and you can claim all you want that it represents a tribute to “the gallant kids from around here who lost their lives," but it doesn't. It represents slavery, treason, and post-Civil War bigotry. You want to celebrate southern heritage, then celebrate our cuisine, our music, our literature, but don't celebrate that flag, because that flag and what it represents has held us back as a region for over a century, and people like you are keeping it relevant.

And for the record, the artist John Sims provided what I think is the best way to treat the Confederate flag. 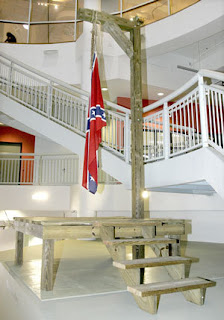