I'm sometimes astounded by the power of media narratives. Remember how, during the primaries, the fact that Senator Clinton was beating Senator Obama among Hispanic voters spelled doom for Obama in the general election? Turns out not so much. But notice the second paragraph in the story about the poll results.

The results represent a ''sharp reversal'' in Obama's fortunes from the primaries, when he lost the Latino vote to Clinton by nearly 2-1, prompting speculation that Hispanics were leery of voting for a black candidate, said Susan Minushkin, the center's deputy director. 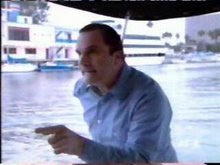 Those people could use a visit from J. Walter Weatherman, who would waggle a finger in their faces and say "That's why you never use primary results as an indicator for the general election." He'd probably have fake blood spurting out of a stump for good effect.

The news from the poll was really good for Obama, by the way.

Instead, the survey found that three times as many respondents said being black would help Obama with Hispanic voters, as opposed to those who said it would hurt. And 53 percent said his race would make no difference.

So much for the theory that Hispanics won't vote for a black candidate, one would hope. I doubt that those numbers would be as good down here in south Florida, where there's such a large and powerful Republican sentiment in the Cuban-American community, but as a sample of the larger population, it's good news for Obama and Democrats in general.