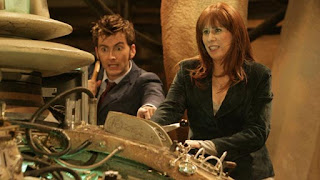 Arg, beware! Thar be spoilers ahead!

First, I should say why I'm devastated: it has never seemed to me a noble goal to wish to be "with" someone: to admire, to crush on, to go ga ga for, and want. One of the reasons I so loved Donna Noble as the Doctor's companion is that she would rather he keep his alien hands to himself, thank you, but his experiences and abilities, that's another matter.

In short, Donna didn't want to be "with" the Doctor, she wanted to be the Doctor, and I think that's what made her so compelling. To get all feminist for a minute, she was not the woman who dreams of being (blond, perfect) Rose, but the woman who dreams of being the time traveler herself: the Doctor. The season began with her taking on the Doctor's role (investigating Adipose), and she went on to travel time and space with him with the attitude of a squabbling sibling more than anything else.

So, in the final episode, when Donna IS the Doctor, it is hysterically funny, yes, but it's also the culmination of her transformation from Human Lowest Common Denominator to the most important person in "all creation" -- the person who prevents the destruction of every (infinite) parallel universe -- by being the utterly dismissed and completely forgotten person who, because of an aborted regeneration, happens to have the Doctor's memories and knowledge at just the right moment. It is perfect and afterwards seems inevitable, yet no one in All Who Blogdom saw this coming (myself included), which I just point out to tip my hat to Russell Davies at the quality of the writing.

What is devastating is what follows. Donna's brain can't hold all that 900+ years of knowledge -- if it all stays in her head it will kill her. And if she knows how to fix the chameleon circuit, I suspect that she knows that, too. Which explains the nervousness with which she plays this scene. But the way the Doctor grabs her and steals every memory of every thing she's done -- she saved a single family from the wrath of Vesuvius, she helped free the enslaved Ood, she gave her life to correct a timeline in which the Doctor never met her and died killing the Racnoss -- not to mention everything she's seen... well, let's just say I would like to have seen her make that choice herself. Frankly, given the choice between death and going back to the woman she was before she was sucked into the TARDIS, she might have preferred to die.

Now I remember how those viewers so in love with the romance between the Doctor and Rose felt when Doomsday aired and Rose was trapped in a parallel universe (and Donna pops up like a punchline to a funeral) -- but this is worse. Donna isn't trapped far away from something she loves: she is trapped away from herself. She doesn't even know who she is. Or, rather, she thinks she's the same woman who showed up on the TARDIS at the end of Doomsday shouting "whot?!" -- when she is so, so, so much more.

I love seeing characters evolve -- and I will admit to feeling more attached to this character than most (my gut churned for the week between The Stolen Earth and Journey's End so terrified was I for Donna -- the other characters' survivals were more or less assured by their continuing appearances on spinoff series), so, when that was taken from her: the evolution itself, that change she went through, that seemed to me crueler than death. I think it was appropriate that they ended the show on such a sombre note: no crashing Titanic or flash towards the upcoming xmas special... 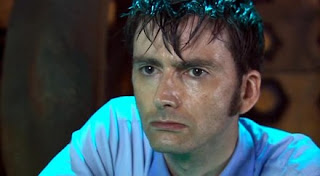 ...just the Doctor staring off into the near space, feeling the weight of what he's done. I mean, we watch these shows for the story, right? That is what we value and what we love. And what was taken from Donna? Her story. The most magnificent story. The thing we treasure most. It is stolen and gone. It is sadness made drama made real.

There is a glint of hope, I suppose: many viewers have noted the large, black, shiny ring that Donna wears throughout at the end of the season. As the Doctor Who Wiki says:

I love that deadpan humor, there, but in truth it wasn't a glimmer so much as a blinding glare -- and such glares into the camera do not happen in a series of this quality by chance.

Season 3 also ended on a more obvious reference to a ring: the Master's ring is picked up from his funeral pyre by a red-fingernailed hand while his laughter echoes in the background. (I said it was unsubtle.) Since Donna was introduced to the series in The Runaway Bride (which included the biodamp ring: "with this ring, I thee biodamp"), and since chameleon arches in the form of pocketwatches are apparently common accoutrements of traveling male Timelords (and since "Time Rings" were apparently a Gallifreyan thing, going back), one wonders.

The Season 3 finale also has the Master mentioning the Doctor's "dream" of bringing human and timelord together -- since that's what Donna is, literally, this all feels a bit connected. Or maybe not: in the end, this is all hope, but not just the selfish hope of wanting to see more episodes with Donna Noble in them:

I hope that this story turns in such a way that Donna can access those memories, and can become some version of the woman she became as a result of her travels.

Good God, Russell Davies: give her her story.

Story is everything -- it would be less cruel to deny her life.

EDIT/ADDED 8/1: This episode aired tonight in the US, so a lot of people are seeing this for the first time. I know you are finding this blog post some time after I wrote it, but please feel free to comment. Sure, some time has passed, but the wounds are still fresh, and I wouldn't mind hearing more thoughts on this season's heart-crushing ending, and what this might mean going into future Who tales.