There are so many photos of John McCain and George Bush together, that it's tough to choose which one. "The Hug" is now ubiquitous, but I take this one more personally. 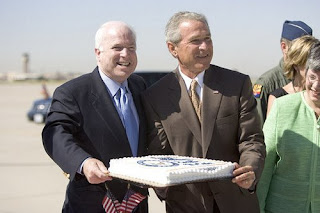 Why, you ask? Because this photo was taken at John McCain's 69th birthday, August 29, 2005. Four days later, my daughter would be spending her 15th birthday salvaging her clothes from her flooded home in Bay St. Louis, MS.

That's right. Hurricane Katrina was coming ashore and John McCain was celebrating his birthday with George W. Bush on the tarmac in Arizona. Tie those images together during this campaign season.