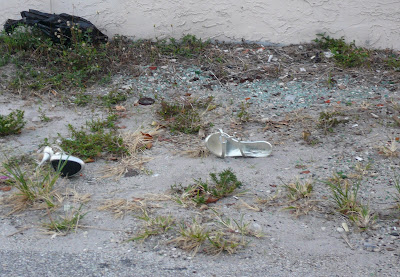 My name is Amy, and I'm a native Floridian. [response: "hi, Amy."] I've been a native Floridian for 33 years, now, and I feel about like a discarded pair of fuck-me pumps on an inner-city corner. I went out that night with high hopes and dreams of glamour, but obviously something went very, very wrong. Was it murder? Rape? Was she struck by a car? Was she just forced to walk home alone through the dark and felt the need to throw the damn things off? Did she only make that decision when someone gave chase? I don't know. What I do know is this: the place I live (and love) is becoming a bad, bad place, and it makes me very sad.

I went to the dance with my fellow Floridians, who, because that is the way of this state, are a fairly transient bunch, more likely from Ohio or Texas or New York or Tennessee (etc.) than actually from here. They've got a milder form of the snowbird syndrome: "I live here, but I don't actually care about the place. I'm not willing to actually contribute to the community." Unlike the snowbirds, the people who come here to live for a year or two can vote. From the day they unload the U-Haul (or "have their things delivered"), they can vote. It makes things rough for us, it sure does.

Recently, the jackasses voted themselves a tax cut. It saved homeowners an average of $200, and everyone else got zilcho. As a result, our local police is in upheaval, our schools are in upheaval, and everything is rapidly beginning to suck. Where I work, the axe just fell on the first three of many layoffs to come, and the students are already complaining to me about not being able to find an advisor. I'm going to drop the advisor gig because it's already clear that more work is being shifted onto me -- it's no longer worth the course-release (if you don't speak academic, that means I get the same pay but instead of teaching one of my 4 courses, I do advising work -- teaching a course is now far, far less work than this advising gig, since they're loading other people's jobs onto mine, so I'm out).

But I'm even more worried, now, because the same morons who voted to eat dollars rather than buy groceries are being given NINE CONSTITUTIONAL AMENDMENTS to vote on in November. What are they? Here they are:


1. Repeal "Alien Land" Law -- This would remove a prohibition on property ownership by people ineligible for citizenship.

2. Gay marriage ban -- This would cement Florida's reputation as a hate-filled backwater full of knuckle dragging morons who are so scared that someone, somewhere, might be having sex for love and pleasure and/or regarding women as people instead of breeding husks, that the very idea puts them into apoplectic fits of legislation.

3. Energy/hurricane tax break -- Makes it so you can improve your house to make it more hurricane resistant without raising your tax burden due to the now-increased value of your home. Why this needs to be put into the state CONSTITUTION is a mystery, but I suppose having it there might help with the anti-taxo's long-term plans of making taxation unconstitutional.

4. Conservation land tax break -- Exempts land left undeveloped for conservation purposes from taxation, and makes it so land is taxed according to its "current" use instead of its potential use. Along with reprising my anti-taxo argument above, I'd like to point out that this screams "potential for abuse" by land-developers who, because of, say, a dip in the housing market, temporarily slow their building, yet still own all this "undeveloped" land, which, oh I don't know, they might just call "conservation" land for tax purposes? Hmmm?

5. Tax swap -- Would eliminate property taxes for schools by 2011. The missing money would supposedly be made up by sales tax revenues and other tax expansions. In theory, this could be a good thing: right now schools in poor areas have less money that schools in rich areas because of local-property-tax-funding. Getting rid of that could put schools on a more equal footing: the poor neighborhood's high school and the rich neighborhood's high school having equal dollar amounts to work with. The problems with this, though, are legion. Greatest among them: first, making up shortfalls by sales taxes shifts the tax burden to the poorest people, and second, no one intends to fund the poor schools at the level of the rich schools -- they intend to decrease all the schools' funding, so that the public school system collapses and a private-industry "opportunity" is created (or, really, expanded) with for-pay for-profit schools being the only real option for anyone who has the money and wants a decent education for their kids. This would only increase the disparity between neighborhoods, with poor kids being served by next-to-nothing and rich kids ALL going to private school.

6. "Working waterfront" tax break -- This would give businesses with water views (marinas, boat repair, etc.) a property tax break for not selling out to condo development. Nice idea. 5 years too late.

7. Repeal ban on funding for religious organizations -- Scary evil psycho proposed amendment 7 would remove a ban on state funding for religious groups from the constitution. That amendment, called "the Blaine Amendment," is in the constitutions of most US states, and has been for a century. They want to get rid of it because it impedes the "school voucher" program (aka, the "destroy the public school system once and for all" program) that they want to take effect. #7 & #5 go hand-in-hand to make it so that Florida will truly have a 3rd-world style "education patchwork" of religious schools and private schools for the elite.

8. Community colleges -- Would allow counties to raise local sales taxes to pay the bills at the local community colleges. Once again, this would shift the tax burden onto the poorest people, the people who must spend all their money, paycheck to paycheck, to survive. What bullshit.

9. School funding vouchers -- Puts those public school system destroying school vouchers RIGHT into the constitution, where they belong about as much as a maggot belongs in your brain. Along with #7 & #5, #9 is part of the "destroy Florida's children" trio of amendments.

Now here's the thing: recent experience has taught us that amendments in Florida tend to get passed. For some reason (they're only going to live here 2 years?) too many Florida voters are inclined to just vote "yes" on these things, whether they understand them or not. So defeating the barrels and barrels of toxic fermented bullshit contained within these amendments is going to take effort from each and every one of us. We cannot trust people to figure it out -- they won't. They don't. They haven't in the past. Talk to people, people. Make this the year the Florida voters vote smart.
The text of these proposed amendments can be found here--Brian.