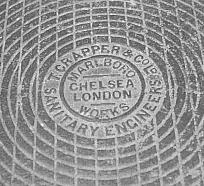 Every now and then one's internet ramblings leads one to a link and lands one on a page where unexpected hilarity ensues. I don't even remember how I ended up on the Wikipedia entry for Thomas Crapper, but rarely have I been both entertained and edified so well.

You may have believed, like I did, that Thomas Crapper was the inventor of the flush toilet. I'm pretty sure that was a trivial pursuit question at some point -- a fairly memorable one. But it turns out that story traces back to a 1969 book titled, Flushed With Pride: The Story of Thomas Crapper, which was written by the same fellow, Wallace Reyburn, who wrote Bust-Up: The Uplifting Tale of Otto Titzling and the Invention of the Bra. The biggest difference between the two books seems to be that Crapper was an actual person, who was big in, uh, "water closet" accoutrements. His name is on manhole covers in England, and used to be seen on toilets. Wikipedia delightedly adds that he held the patent on the floating ballcock, but really the whole entry's worth reading if just for the debate on the etymology of the words "crap" (n. and v.) and "crapper" (n.).