This is the closest I've ever gotten to a real campaign--for the last five years, Amy and I have lived in safe districts surrounded by safe districts, and I'm, well, lazy by nature, so I've never ventured out to work in a neighboring district. But the Annette Taddeo campaign reached out to local bloggers, and so today, we got to meet with the candidate for about an hour. I'm the bald one. 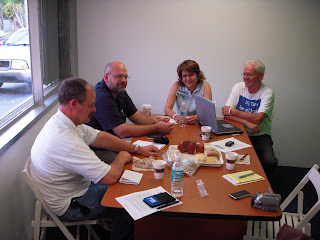 I went into the meeting with a little hesitation--I am of the strong opinion that at this point in time, any Democrat is better than any Republican in Congress, if only for their votes for the leadership and the assumption that 80% of a Congressperson's vote for the caucus is better than 80% against. But I didn't want to put myself out there for a candidate if that candidate isn't at least close to my views on a number of subject. I didn't get to ask Ms. Taddeo all the questions I wanted to, but I got enough good answers to satisfy myself that she'd be a progressive voice for south Florida.

First of all, she's taking on Ileana Ros-Lehtinen, one of the more hard-right Congresscritters out there, and that's a good place to start. It'll be an uphill battle--Taddeo doesn't have huge name recognition and Ros-Lehtinen has been in Congress for 18 years--but the demographics have changed in the district in recent years, and it's not as heavily Republican as it used to be.

She has a good story to tell about why she wants to run, and her primary cause, the reason she was really motivated to run, she said, was Ros-Lehtinen's continual opposition to the S-CHIP program. She mentioned that Florida has 500,000 kids pre-qualified and on the waiting list for S-CHIP, and she takes the failure to expand the program personally. She looks at it as a first step toward getting everyone covered.

And she's really good on one of my pet concerns--Amendment 2. She's on the Advisory Board of Florida Red & Blue, a group dedicated to defeating Amendment 2.

She's currently reviewing the Responsible Plan to End the War in Iraq and expects to make a decision on it soon. I'll update the story when I hear officially from the campaign.

So in short, I'm excited about her candidacy, and I plan on following it pretty closely over the coming months. I'm sure I won't agree with her on everything--her position on the Cuba embargo doesn't go far enough for my tastes, for example, because it leaves the embargo in place but gets rid of the travel and remittance restrictions--but it is far less restrictive than what is currently in place. And there's no question that she would be an upgrade over Ros-Lehtinen.

Side bonus: I got to meet some south Florida bloggers in person--Mustang Bobby, Larry Thorson, and Rick from South Florida Daily Blog. Hope to get together with you guys again.