Worst President Ever? Let's Go to the Chart...

We've all seen the bumper stickers, but as this presidency bludgeons us all to its end, some historians have decided to start thinking about GWB's/WPE's "place in history." 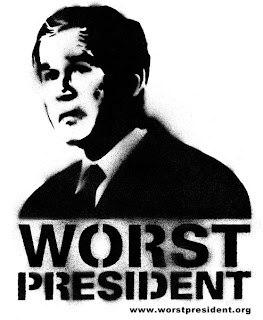 The nonprofit History News Network is reporting that in an informal survey of 109 historians, 98.2 percent considered President George W. Bush’s presidency to be a failure, while 1.8 percent called it a success.

On the question of whether he is the worst president in history, there was greater difference of opinion: 61 percent said he was, while others disagreed or are withholding their opinions. (The survey also made clear that James Buchanan has some work to do rehabilitating his whole catapulted-the-nation-into-Civil-War reputation.)

We take most unscientific surveys with a large grain of salt, and this certainly falls into that category. On the other hand, we like the idea of historians starting to think about the George W. Bush presidency, and how it fits into larger patterns of American history.

We’d be interested in knowing more about the 1.8 percent of historians who regard this presidency as a success.

Given the disastrous Iraq War, the sub-prime mortgage meltdown, the economy hurtling toward recession, the huge budget deficits, the plummeting dollar — to name just a few problems — these historians sound a lot like the 20 percent of dentists who don’t recommend sugarless gum for their patients who chew gum.

I agree with the Times that the most mysterious thing about this is that there are 2 "historians" out there willing to prove their own incompetence just because they still stroke their bookspines lovingly to the WPE's faux crotch bulge on their fading videos of "Top Gun Day." Or something.

So I clicked the link and went to the source of this survey to learn more. And this is the first thing I see: 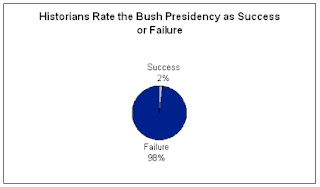 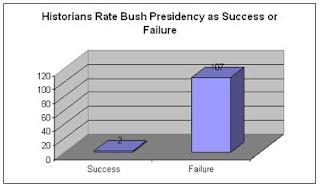 And for those of us who prefer a little more nuance: 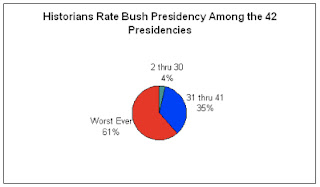 The article notes that the historians who placed bu$h in the "31 thru 41" category were likely counting just one or a few presidents (namely Buchanan, Johnson, Fillmore, and Pierce) worse than him. Making him the "nearly worst president ever" in the eyes of a minority. The clear majority, however, votes for Worst Ever.

It's good to know they're on top of this. The rest of us might never have figured it out.