There's a lesson in this

And that lesson is this.
Always look for a better camera angle.

Here's what I'm talking about. At a rally in North Carolina after Wednesday's joke of a debate, Barack Obama was giving a speech, and the crowd went wild after he made a statement and scratched his face. Here's what a lot of people saw.
Some people went batshit insane, and claimed that Obama flipped off Clinton. Forget that there's no political upside to doing such a thing, forget that the angle in that piece of film was less than conclusive--people wanted to believe the worst of Obama, and so they did.

But here's why you need a better camera angle before you go shooting off your mouth and looking like a fool. 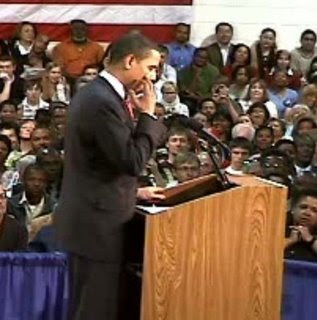 Two fingers. Clearly two. Not one. Two. And you know how you can tell it's two? Because this is the best possible angle to tell. No squinting, no taking three steps backward and looking through your legs, no covering one eye and swinging your arm wildly to get the blood to a particular part of your brain. Just get the right angle. And stop believing the worst of your opponent.

And Obama supporters--that goes for you too. Stop saying stupid things like "Hillary is now objectively a Republican." She isn't, and you look like a damn fool when you say it, and the more you say it, the less likely Clinton supporters are going to be to listen to you if Obama wins the nomination. And don't for one second think that Obama can win the presidency without them.