The Latest in Police Technology 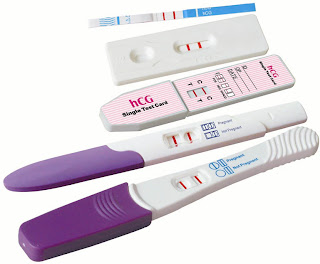 Assuming that this bill, passed by the Florida legislature today becomes law, this will be the latest tool the police will have at their disposal to investigate serious crimes--the pregnancy test. Yes, I'm serious.

If the "fetal homicide" bill passed the Senate and became law, anyone who caused a pregnancy to be terminated by assaulting or killing a woman could be prosecuted for murdering the "unborn child" — even if they didn't know the woman was pregnant.

The bill also would apply to drunken drivers, who could be charged with vehicular homicide for causing a pregnancy to be terminated in a car accident.

So, will cops be asked to proctor the test at the accident scene, or will the woman be allowed to take it at the hospital? Will every woman who is involved in an auto accident be required to take the test, unless she can provide proof that she has either not begun her period or has entered menopause? What if two women hit each other and both are pregnant--will both be charged under this law? Will women who aren't on their periods be advised to stay off the roads just to avoid the possibilities?

I could ask some silly questions if I wanted to, but I think I've made my point already. This bill blows past stupid like it's a dirty hitchhiker outside a deserted rest area at twilight, and it opens up a whole swath of privacy issues. Let's be clear about this--I don't actually expect that, if this bill becomes law, police will be issued a pregnancy test holder to be attached to their gun belts. But it is, as Adrienne Kimmell, executive director of Florida's Planned Parenthood affiliates says, intended "to create tension with Roe vs. Wade. It's a chipping-away strategy we've seen for years now."

There are a lot of different ways to fight this kind of legislation. I'm choosing open ridicule, because that's my strong suit. The legislators who wrote this and voted for it are either short-sighted idiots, or dishonest hacks who want to turn women into slaves whose reproductive organs are open to inspection by the state any time the state deems it necessary.

This bill passed the House last year and died in the Senate. Let's make sure it faces a similar fate this year.