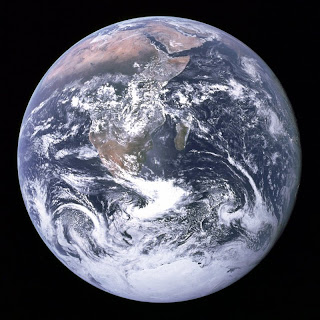 I don't object to conceptualizing an economy as a biological organism, what I object to is the idea that organisms exist in a state of "balance." We all tend to get sucked into the pastoral ideal, progressives more than most, which is really what 60's style nature-worship is all about. We want to believe for example that an ecosystem is this harmonious interplay between perfectly interlocking parts -- analogous to early models of the solar system, with their perfectly circular orbits and perfectly spherical planets. Such models are comforting because they imply that all is balanced and "right," that there is order in the universe. But such models are wrong; they are wish-fulfillment fantasies. The solar system is a terrible, non-symmetrical place, violent and dangerous -- and so is "Nature." Animals gorge and starve, compete and die. "Cute" animals -- our fluffy mammal brethren -- live short lives not only as prey for other animals, but as food for ticks and fleas and diseases, and they die of things as unpastoral as colon blockages, or are eaten alive in weakness or injury. Everything out there is just trying to survive long enough to reproduce: sad, desperate, grasping, hungry -- brutish and short.

Humans are smart enough that we've been working our way out of "Nature's" trap for a long, long time. We've developed weapons and fortifications and medicines and insecticides and techniques to unblock even the most bunged-up colon. Yet when it comes to the planet, our goal has not been to control, but to either exploit or leave be. That's the strategy that would have us naked in trees, bitten and diseased, gorging on the occasional windfall, dead by twenty. We can't (and shouldn't try to) return the planet to its "natural state" (which I put in scare-quotes both because said state is a violently, frequently changing thing and because we are a part of nature) -- but we should be working very hard to control it and make it suit us and increasingly meet our increasing needs.

This whole train of thought is inspired by a weekend of reading news articles that incessantly refer to the economy as though it is an ecosystem or animal that must find a "balance" -- but the truth is even ecosystems and animals don't live by a principle of balance; they live by a principle of feedback loops: the strong get stronger, the weak get weaker, the rich get richer, the poor get poorer, the cold get colder, the hot get hotter. Anything that looks like "balance" is a precarious stalemate, a fulcrum point, or a misperception.

Long term, our current climate crisis will seem like nothing. Our entire solar system is spinning along with the arm of a galaxy headed straight for a patch of radiation so severe that unless we've figured out by then how to control the climate of the Earth the same way we control the climate in our houses, the majority of the human race will die of starvation in an equatorial blizzard. I suggest we use that knowledge not only to spur us to climate-controlling action, but as the guiding metaphor for our economy: CONTROL is the key. We must control it and make it benefit the entire human race -- not just the rich few with elaborate protective bunkers. Because even that scary patch of radiation will leave the elite alive, just as the elite will survive food and fuel crises.

How much of the human race is with us? Who do we want to save? And how hard are we willing to work to save them? That is the question.