The Danger of Relying on Photos

Expect to see this photo a lot over the next couple of days. It's already the basis of a recommended diary at Kos, it's been linked to by Atrios, and it was posted, originally, so far as I can tell, at The Corner. 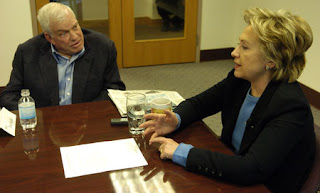 It's Hillary Clinton sitting down with the owner of the Pittsburgh Tribune-Review, Richard Mellon Scaife. Yes--that Scaife. The one who funded the Arkansas Project, the one who pushed the "Hillary killed Vince Foster" story, one of the most odious men in recent history. And Hillary sits down with him during an interview with the editorial board.

Atrios says he'll "let the picture speak for itself." But that's precisely what we can't do, because the picture alone doesn't say anything other than that those two people were in the same frame at the same time. There isn't an automatic narrative here, much as Al Rodgers would like to think there is.

Why? Because pictures don't talk.

Let's examine the context we do have. Pennsylvania is the next big contest, and Clinton has to have not only a win, but a big win in order to stay in the race. So meeting with the editorial board of a newspaper is not only a good idea, it's a necessity, even if the owner of that paper is the biggest scumbag on earth, who accused you of murdering a childhood friend for nothing more than political gain, because if you're running for President, and you're behind, then you do shit that will turn your stomach most of the time. That's the ugly truth of it.

And the only indication that this is anything approaching a friendly meeting is a throwaway comment at The Corner--do I have to say how trustworthy I find them when it comes to anything Clinton?

So is Hillary Clinton making nice with Scaife? Maybe--but it's not certain based on that picture. For all we know, she could be telling him to fuck a dog and die. He could be calling her a pox-ridden cunt. Unless we have a transcript of the meeting, we don't know, and it's intellectually lazy, if not outright dishonest, to imply that we do. Neither Atrios nor Al Rodgers have provided a transcript--they're letting the photo do the talking, and Rodgers in particular is letting his imagination do the rest.

Rodgers may well be right. Clinton may be making nice with the man who did more to subvert democracy in the 90s than perhaps any other American. But the picture doesn't say that, and if Rodgers winds up being right, then he got lucky, nothing more. And if he's wrong, then he's slandered Hillary Clinton, and sadly, won't pay any sort of price for it.