A Florida legislator from Miami, Sen. Larcenia Bullard, has introduced a bill in the state house that would make hanging a noose to intimidate others illegal. It's being pushed in response to, among other things, the incident last year in Jena, LA, which I and my co-bloggers wrote about here.

The devil is, of course, in the details.

The bill, filed last week, would prohibit a person from placing a noose in a public place, on the property of another without written permission of the owner or in an exhibit of any kind with the intention of intimidating another person.

It's the first and third part that worries me, both as an artist and as an advocate of free speech, even hateful, potentially threatening speech.

I have no problems with the second condition, by the way. Most cases of this would constitute making a work environment hostile to a certain class of people, and I've got no problem telling business owners that if they're going to allow their employees to hang nooses, then they're going to put their names on them as well.

I'm torn on the public spaces one, frankly. I don't like groups like the Klan, but they do serve a purpose. They remind us--in case we live in a privileged position and forget--that hatred still exists out there, and that ignoring it is not an option. And Klanspeople do have the right to speak in public just like everyone else--just like we have the right to speak back and try to drown them out. If a noose is part of their symbolism, I'm loathe to deny them that, because that sort of law could just as easily be turned around on me someday. Freedom of speech is important, but it isn't easy.

But the hard one is the third one, because it asks for law enforcement people, and then later, a jury, one assumes, to determine intent, and that's a hazy question at times. For instance, what about this exhibit? 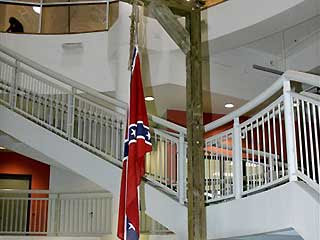 It's from an art installation in Tallahassee I wrote about last March called "The Proper Way to Hang a Confederate Flag," and the Sons of Confederate Veterans hated it. Now say, instead, they complained to the local authorities that they felt threatened by that noose, that they felt it was an incitement to violence against people who "honored their southern heritage" by hating African-Americans? And don't think that it wouldn't happen--these are people who have been claiming for generations that the slaves were happy on the plantation and that the Civil War wasn't about that anyway. And in some parts of the country, that argument would fly.

One of the reasons I think it's a bad idea to shut down speech, even hate speech, is that if you force it underground, you allow the purveyors of that hatred an argument that they're being martyred for political reasons. I think it's better that they be allowed out to speak, and be mocked for it. Let them try to sell their ideas in the market of public opinion--they will go home just as bankrupt as they came in.

Let me say, however, that I wouldn't object if this law passes. My hesitation is theoretical, but the threat to African-Americans is real, and it seems to be on the uptick lately. I'll be very surprised if the Presidential election goes forward without at least one overt attempt on Barack Obama's life. Dave Neiwert has pointed out that the Klan wants Obama dead, and Bill O'Reilly's comments about not sending a lynching party after Michelle Obama for her remarks about her pride in the country unless she really meant them (at which point, one assumes, BillO would be carrying the rope). In the face of that, are my concerns about the limited potential for the misuse of a law against an art installation valid? (In case you haven't figured this out yet, I'm sort of working through this as I write.) They're probably valid, but I don't think they warrant an objection to this law. Some things are, after all, more important.