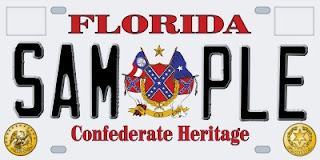 Maybe coming soon from a redneck near you.

From Think Progress via John Cole, the newest in ideas for Florida license plates, guaranteed to piss off a large percentage of the population as quickly as a pristine Bush/Cheney sticker.

Rep. Donald Brown (R) introduced a bill last week to create a “Confederate Heritage” license plate for the state. Saying “it would give motorists a way to show pride in their heritage,” Brown proposes a $25 charge for motorists to purchase a plate with “a shield displaying the rebel battle flag symbol surrounded by several flags from the Civil War era.” The money would benefit “educational programs run by Sons of Confederate Veterans,” which considers the Civil War to be “the Second American Revolution.”

Mind you, he's suggesting this in a state where racial tension is already an issue, and in a year when the Democratic party frontrunner is African-American and the national Republican party is worried that their avenues of attack on him might be construed as racist (which is not hard to understand, given the asshattery of many of their members). Maybe the Republicans should listen to Melissa McEwan's sage advice on how not to be perceived as racist or sexist. They might start by metaphorically slapping Rep. Brown upside the head for being stupid.

P.S. I'm not advocating any action here. I'm just saying I wouldn't be a bit surprised, assuming this plate actually gets made, to see a sharp uptick in auto vandalism on vehicles carrying it.