It's good to be home

Amy and I were gone this past week, to the AWP Conference in New York that Bradley got linked to for blogging about even though he wasn't there. Funny thing--of the four bloggers here who write creative (as opposed to scholarly) work, Bradley was the only one not at AWP, and was also the only one to blog about it. We're an odd group.

It was a good trip. It began for us at the Fort Lauderdale Amtrak station, because we're big Amtrak fans and this trip gave us no cause to change our minds. Some track problems caused us a short delay getting into New York, but no more than a traffic jam might delay one coming in from LaGuardia or JFK, and the return trip was as smooth as could be. And besides, how can any trip be bad when you're sporting a hat like this one. 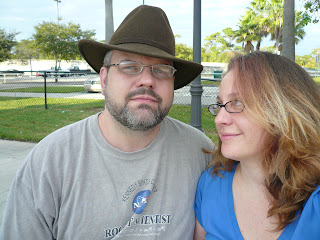 The conference was fine, I guess--we didn't make it to anything other than the bookfair, but we brought home lots of swag, stacks of new books, and a short list of places to send work, so in that sense it was a success.

Besides, the real action was going on off-site. We went to a couple of poetry readings in the East Village the first couple of nights we were there--the second, at the Bowery Poetry Club, was the big one, with readers like Timothy Liu and Cole Swensen. We missed some of the other big names, but the experience allowed me to make some observations on the oral presentation of poetry that I'll expand on later.

The really fascinating thing about that reading, aside from the poetry, was the facial hair. This wasn't the case for the entire convention, but at this reading, I got the distinct impression that the only men not sporting some sort of beard were the ones who couldn't grow them. Shaving wasn't rebellion in this crowd--rebellion meant refusing to trim said beard, letting it grow thick and ratty, stray hairs bristling out a la Allen Ginsberg's, though most hadn't been growing them long enough to get that sort of bulk. I doubt many of them will have the stick-to-it-ive-ness necessary to pull it off. That sort of a beard requires real dedication, and strong neck muscles.

The closing event was the prom. Seriously. It was a "dance," on Saturday night from 10 till midnight, the last chance for those lonely writers who hadn't yet hooked up to find their others. It was the last ten minutes of "The Love Boat," but with faster music. And what music it was. When we showed up--an hour into the soirée--the DJ was pumping some old school dance music. Salt n Pepa, Run DMC, dance music for people approaching forty who aren't quite afraid they'll throw out a knee. It provided moments like this.

It went downhill from there. First it was dance mixes of oldies, which is fine when it's Ray Charles and James Brown. But then there was Skynyrd, and Guns and Roses and Bon Jovi. "Bad Medicine" Bon Jovi. It had to end, because there was only ten minutes to go, and after a salsa interlude which left most of the dancers looking at each other wondering what to do while 3 couples meringuéd, it was time for the final song of the night.

We did the important things--met up with old friends, made new friends and new connections, and had a good time. Next year is in Chicago, but if I may make a suggestion to the people who put these things on, take a hint from the NFL. The Superbowl is rarely in a place where there's actually winter. There's a reason--winter sucks. Now, there's this little place called Fort Lauderdale that would be perfect for that sort of convention. Just saying.