Busy, busy, busy these days, and feeling a little behind on everything (particularly blogging, which is usually at the bottom of my to do list), but I wanted to take a moment to post a couple of pics from last weekend's trip to New York City for the AWP conference. The conference was interesting enough (I went to one panel that was stellar), but the highlight for me was being in New York City. I simply love that place, though I tend to feel as if I've been fleeced once my visits are over. Anyhow, here are a few images:

Friday nights at the MOMA are free, so that's the day we decided to go; it seems everyone else in town had the same idea because the place was packed. This image is from a room showing a film of a typewriter being covered with white powder (flour? sugar? cocaine? I have no idea). Some visitors were particularly taken with the projector: 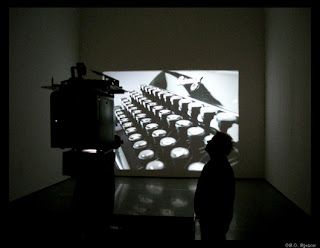 No visit to New York is complete for me until I've visited Strawberry Fields: 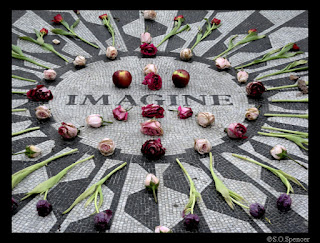 A bride (I assume) making her way through Central Park. You can't tell in this picture, but she didn't look particularly pleased to be out there. I think it was all the mud she was trying to avoid (it had rained all day the day before.): 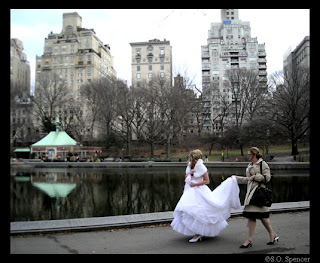 An Obama rally on Times Square, outside MTV studios. I came across this rally by accident as I was trying to make my way back to the hotel. I took a couple of shots and kept moving. About a block away I stopped and thought, How often do I get to participate in a political rally in Times Square, with parts of it being broadcast live on MTV? So, I turned around and walked back to join the crowd. Quite entertaining. 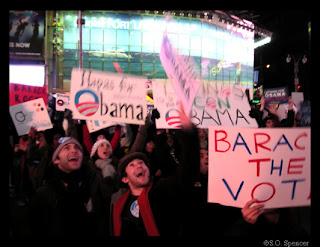