As appropriate now as it was then

Clinton surrogate and Machinists union President Tom Buffenbarger: "Give me a break! I've got news for all the latte-drinking, Prius- driving, Birkenstock-wearing, trust fund babies crowding in to hear him speak! This guy won't last a round against the Republican attack machine. He's a poet, not a fighter."

Amy's reply to a similar attack on liberals from 2004: 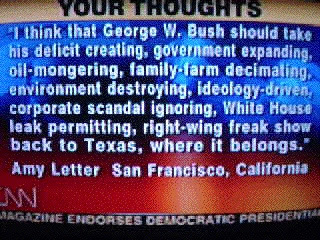 Okay, so it's not a perfect analog. Clinton is far from being George W. Bush.

And what's wrong with being a poet anyway?