Three Things to Know About the BrIsaacsons on Their Third Anniversary 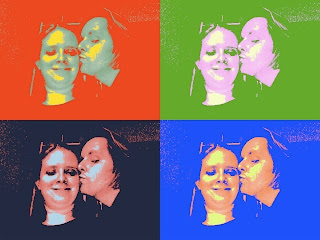 1) The first song the future BrIsaacsons ever danced to together was David Bowie's "Modern Love" on "retro night" at a club called Shattered in Columbia, Missouri.

2) Bradley and Emily had been dating for over six months before Emily eventually asked, "So... what is creative nonfiction?"

3) Bradley proposed to Emily on a sidewalk in downtown Columbia one Friday night. As he began his proposal, academic superstar and editor of The Minnesota Review Jeffrey J. Williams walked by (as was his right-- it was, after all, a sidewalk) and shot them both a quizical look before realizing he'd stumbled upon an intimate moment and walking away. Bradley was so flustered by the presence of an intellect so much greater than his that he actually said, "Oh, forget it," but Emily grabbed his arms and demanded, "No! Finish what you were saying!" And that's how they got engaged.

Happy Anniversary, honey. You're the Lois to my Superman, the Beatrice to my Benedict, and the Chuck Norris to my Mike Huckabee.