I was making my way through today's paper, reading that the White House had taped over backup computer tapes of executive office emails (how convenient), and reading about whether anyone will pay attention to our state's Democratic primary when, just as I was ready to turn the page, I noticed a Confederate flag in an advertisement for a local restaurant. When I looked closer, I saw it wasn't just one, but three Confederate flags. The banner across the top read "Don't Miss Robert E. Lee's Birthday!!" And the text at the center of the ad appealed to "Confederates & Patriots" ("Northern by Birth, Southern by Choice??"...C'mon Down!!"). At this restaurant, someone will be singing Civil War era songs for Lee's birthday. I must have read the ad from top to bottom ten times in an effort to discern every Confederate reference. Judging from the extensive use of exclamation marks in the ad, it is meant to be fun and celebratory (Woohoo!! It's Robert E. Lee's Birthday!!). However, the flag has been on my mind (again) because I recently watched a documentary on the history of the KKK, and the Confederate flag was ubiquitous throughout the film; Klansmen were carrying it or wearing it. So, seeing it in today's paper as a design element for a local restaurant's advertisement, I couldn't help but give the stink eye.

I'm not easily offended, and I'm not exactly *offended* by the ad. I'm sure the restaurant is presenting it with benign intentions (at least I assume this is the case). However, I'm baffled that the flag can be used for two totally different purposes: one to imply racist ideals and one to sell food. I'm interested in understanding why it doesn't (seem to) carry the same kind of punch that other race-related symbols carry. I guess its meaning has been diluted over the years. For those of you who know me and know of my interest in the symbolism behind the flag, I'm sure I'm starting to sound like a broken record. But, like I said before, I just find it baffling. 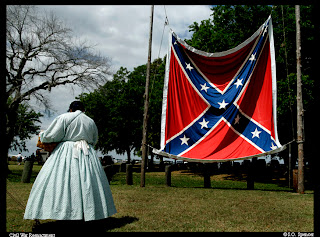