Yep, we're still dealing with this 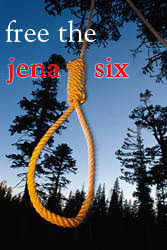 Jena is back in the news, on a much smaller scale than before, but for a couple of reasons. First, from Feministe, the news that Mychal Bell, the one member of the Jena Six known to have had a criminal record before the incident that sparked all the controversy, has, as a part of his plea deal, been told that he may have to testify against the other five, which likely means jail time for the others. As I've written before, I think the only solution to this issue is to drop all the charges against everyone involved. This became a problem because the white power structure in Jena refused to take a stand against the racist actions of their youths, thereby siding with them. If the city had stepped in when the nooses had first appeared, maybe this doesn't escalate, and if it had, it would be easier to assess blame in the matter.

And there are goups looking to exploit the mess that Jena has come to symbolize.

JENA, Louisiana - A white separatist group planning a Martin Luther King Jr. Day parade next month in Jena is suing the town, claiming officials are violating the Constitution by asking participants not to bring firearms, changing the parade route by one block and requiring the posting of a bond.

The Nationalist Movement filed the federal lawsuit Dec. 14 and is seeking a temporary restraining order to keep the town from interfering with the Learned, Mississippi-based group's "Jena Justice Day" rally. Group officials claim the town's rules violate their 14th Amendment rights under the U.S. Constitution to due process.

This actually dovetails nicely with the discussion we've been having about tolerance below. My belief in a strong First Amendment requires that these people be given the same space that the protesters in support of the Jena Six were given--but it doesn't require me to give them anything more than that. And it's curious that a group which is asking to return to a day of openly segregated schools (including at the University of Mississippi, which sports perhaps the most racist mascot in the nation) is also asking for "no noise from hecklers." No no, sir. You have the right to spout your hateful drivel, but the locals have the right to shout you down if they are able. That's how this freedom thing works.

It looks like Mayor McMillin, a man who hasn't been the most supportive of racial harmony in the past, is trying to take a fair, middle ground in this case, which is good. It's a start, and maybe he's learned something from this debacle. I hope so, because that's the only way the issue of racism is going to change--white people in a position to have an effect have to stand up to their fellow whites and say "enough is enough." It won't be easy, and it won't happen quickly, and in fact, it may not happen at all, but if it's going to happen, that's where it has to start.