Me and My Monkey Friend 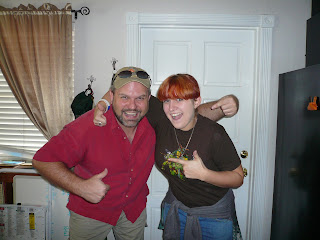 I guess I'm the last to take on Mark's meme. I'd planned on doing it in the comments, but I wanted to post something along with this picture, and I'm doing it as an excuse.

So, seven random or odd things about me. I'll have to limit it, but okay.

1. I have this compulsion to stack things, especially in ways that hold together, but barely so. It's especially bad when I'm in a restaurant which serves coffee creamer in those individual containers. I think that, had I been able to draw in the slightest, I might have become an architect.

2. I do the same thing with the letters in words, only in my head. I try to form trapezoids and triangles and and other angular representations with the letters of words, and will do this for long stretches. If you ever see me and I look like I'm deep in thought, I'm probably not. I'm probably trying to figure out how many different configurations I can make "competitions" into.

3. I always have music in my head, and often it's really crappy loops of songs I haven't heard in years. I listen to my iPod to shut it off sometimes--at least then I can control what songs I hear.

4. For someone who doesn't believe in the Christian God, I am tremendously affected by both hymns and gospel music. Both kill me. I actually watched Sister Act 2 just to hear Lauryn Hill sing "Joyful Joyful."

6. I know all the words to "If I Were a Rich Man," and apparently, can sing it while I'm drunk. I tend more toward the Topol version than the Zero Mostel, but I know them both.

7. I can't drink gin. It makes me an asshole. Otherwise, I'm a really happy drunk.

I won't tag anyone else with this, but if anyone hasn't done it yet and wishes to tag themselves, feel free. And of course, you can mock me in the comments.

Labels: Culture Industry, internet meme, Me and my monkey