Bradley's Endorsements for the Democratic and Republican Nominations

Last week, the Des Moines Register and the Boston Globe made national headlines as they announced their endorsements for candidates seeking the major parties' nominations for president. John McCain was each paper's preferred Republican, while Hillary Clinton and Barack Obama got support from the Register and the Globe, respectively.

Anyway, I figured I've kept people in suspense long enough. It's time that I endorsed some candidates. So, here goes. 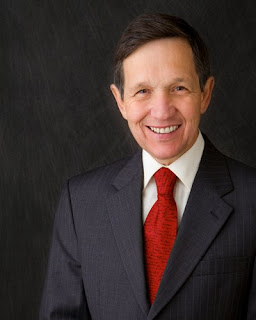 I'm sick of the "conventional wisdom" that says that Kucinich is "unelectable." I can't really get excited by a candidate who authorized the current occupation of Iraq (like Clinton or Edwards), and I also think he's the one candidate with really bold initiatives in a variety of areas-- the environment, the economy, health care, you name it. Of all the candidates, I suppose Kucinich strikes me as the most principled and the most idealistic-- and those two qualities make him a better candidate than anyone else on the field.

Alan Keyes is similarly principled, except his principles are absolutely bat-shit crazy. He even threw his own daughter out of the house and cut her off completely because he thinks that his God commands him to hate gay people, even his own children. And frankly, I think Republicans ought to get excited about Keyes-- he's anti-choice, anti-gay, anti-immigrant, and in favor of abstinence-only sex education. Seriously, he's the most consistent guy the rightwingers have. So let him run!

And then, in January, 2009, we can all welcome President Kucinich to the White House. Pretty sweet, huh?