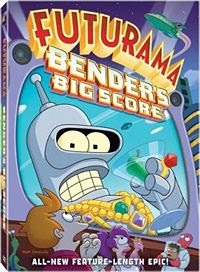 If you're like me (and you very well aren't), you've spent the last several years in fits of uncomprehending angst about the cancellation of FUTURAMA. You've wondered if Season 4's global warming jokes and Al Gore cameos had something to do with it (it was on FOX after all). You've wondered why THE SIMPSONS can wiggle along for years without making a joke that's actually funny, but consistently-brilliant FUTURAMA was pulled at its peak.

And that's why you nearly went into ecstatic convulsions when you heard that, just as FOX brought back THE FAMILY GUY when they realized that there were millions of us out here stroking our DVDs before bed each night, Futurama was being brought back too.

But differently: as 4 straight-to-DVD movies that will then be divvied up into 16 episodes and aired on Comedy Central. (Fuck FOX.)

Now, again, if you're like me, you see "straight-to-DVD" and you immediately worry. It's like one of Disney's sequels to Pocahontas, or the Saturday-morning version of Buzz Lightyear. But you might also see something new in here: shows like Family Guy and Futurama were network flops but huge successes on DVD. Perhaps this is just a new, more savvy marketing strategy?

Well, after seeing the first of the 4 Futurama "movies" I think it's the latter. It was hysterical and brilliant. It is the Season 5 we've all been dreaming of. And Al Gore's still in it. :-) The only only only downside to watching it was that, because it is really four episodes linked by plot, it's actually a little exhausting to watch it all at once: too much happens, it's too fast-paced, for a movie. I'd prefer to watch them as episodes: knowing where the 22 minute break is, being able to do something else for a few minutes to decompress, and then rushing maniacally back to the DVD player and going for the next one.