The ICFU and a note on mascots

It was a good week for Incertasaurians sports-wise. All the U's won in football, and all moved up, more or less, in the only poll that ranks us all. Missouri, being the powerhouse of the bunch, rose to 11th from 15th after beating Texas Tech, the Mighty Burrow Owls climb back into the top 80 (at 77th) after beating Louisiana-Lafayette down in Cajun country, and the Razorbacks finally won an SEC game (Southeastern Conference, not Securities and Exchange Commission, for the sports illiterate out there), beating the Old Miss Rebels 44-8 and climbing 7 spots to number 39.

Which brings me to my note about mascots. King Kaufman of Salon wrote about Chief Wahoo of the Cleveland Indians on Thursday, and he's written about this subject more than once before. Activists have been talking about the racism inherent in a number of college and professional team names and mascots for years, but it's started to gain some momentum lately--not enough that anyone has actually bothered to change their names yet, but at least to the point where when activists bring the subject up, they're not summarily shouted down as though they're just out to kill a good time.

The Indians are not the worst offenders in professional sports, though Chief Wahoo is probably right up there with the Atlanta Braves' / Florida State Seminoles' Tomahawk Chop arm movement and war chant in terms of cultural insensitivity. That honor goes, unquestionably, to the NFL's Washington Redskins. It's a derogatory term, equivalent to kike or wetback or, yes, the n-word, and there's no way it ought to be a team name in this day and age.

But what about this guy? 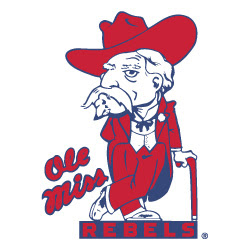 That's the mascot of the team the University of Arkansas beat this past week--the Ole Miss Rebel. Is that offensive? I don't think it's Redskins-quality offensive, but it's pretty messed up, as far as I'm concerned. What does it represent? A celebration of one of the most effed-up periods of US history, and a glorification of treason in defense of slavery. I've written about my love-hate relationship with the region I've lived most of my life in before, and I'm sure I'll come back to it again, because it's impossible to get away from. It's so deeply imbedded in the culture that, in my more pessimistic moments, I wonder if we'll make significant progress in my lifetime, or if I'll still be railing against this in 30 or 40 years. I mean, how much hope is there if we're celebrating this kind of stuff in our entertainment?