It's the kind of picture you might expect to see in a story about a Hollywood actress--an attractive woman, walking away from the camera, looks back across her shoulder with a sort of coy, come-hither grin. An older actress, by Hollywood standards--think Halle Berry, Rene Russo, Sigourney Weaver.

Think again. It's the front page of the NY Times and it's Condoleezza Rice. 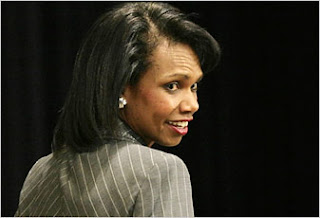 Now I'm certainly no fan of Ms. Rice. I think she was incompetent as NSA and hasn't done much better since she failed upward to succeed Colin Powell--her only real accomplishment seems to have been keeping her head down while scandals swirled around her like tropical storm force winds. And I certainly don't know what Helene Cooper was thinking when she wrote that "There was a time when, perhaps more than Hillary Rodham Clinton or Barack Obama, Condoleezza Rice seemed to have the best shot at becoming the first woman or the first African-American to be president." That time never existed, at least not for anyone with a rudimentary knowledge of Republican party politics over the last forty years, (like, say, Paul Krugman). And I'm certainly not criticizing Ms. Cooper for the photo selection, which she likely had nothing to do with.

But seriously--who chose that picture? Like her or hate her, she's the freaking Secretary of State. She's the first African-American woman to hold that position of power, and you run a picture on the front page that's far more suited to a tabloid rag like the NY Post. You wouldn't have put Madeleine Albright in that sort of picture, would you? How about Colin Powell? David Gergen?

The part of me that wants to give the benefit of the doubt says the photo editor looked at available photos of Rice and saw this one was a flattering photo and went with it for that reason. And it is a flattering photo. But it's also loaded with subtext, and an editor has to be aware of that when making his choices.