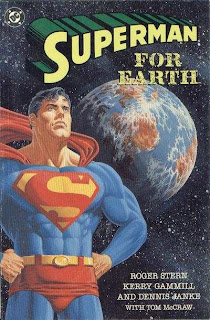 As Emily indicated, things have been really busy here at Casa BrIsaacson-- she's got a ton of papers coming in and a dissertation to defend in two weeks, I've got... well, not as much. But enough. I have more students this semester than I've had in a long time, and I've also been plugging away on a new essay. When I'm not working, I'm generally watching terrible movies or reading comic books that are at least 15 years old. Speaking of which-- I found a copy of Superman: For Earth, a special comic released for Earth Day 1991, the other day, and it was swell. Of course, it's a completely over-the-top, heavy-handed look at the issue where the characters all rattle off statistics about pollution and endangered species in casual conversation-- it would have been cooler if Superman had, like, punched global warming or something. But still, it's heart was in the right place, and it seems to me that the comic would never be published in 2007, where it's now politically dangerous to say that you "believe" in global warming. What seemed like conventional wisdom in 1991-- recycling is good!-- is now controversial, it seems.

Also, this was the comic book where Superman and Lois Lane decided to not have kids, which I appreciated. I don't like children.

Anyway... I've been working on a post about the differences between anger and hatred, inspired by a conversation I had with my grad workshop Monday night about Baldwin's "Notes of A Native Son." Maybe I'll get that posted later today or tomorrow. In the meantime, happy Talk Like a Pirate Day. Here's a clip from a shitty movie I loved when I was a kid.