I was thinking about writing on the news that Hazleton PA's anti-immigration law was struck down by a federal judge, basically because the city doesn't have the authority to make that sort of law. When a subject like this comes up, I slather myself in anti-stupid cream, don the fire-proof suit, and venture over to Freeperland to see what the mouth-breathers have to say.

And then I came across this fund-raising picture, and decided it would be more fun to mock them instead. 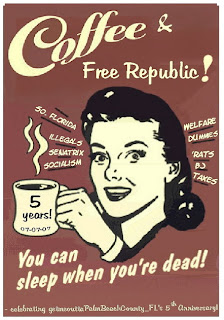 Now, it's true that south Florida is a bit more liberal than the rest of the state. That's not saying much, considering that the panhandle is more like Alabama than anything else. It also discounts the fact that one of the most powerful Republican constituencies in the state is located in Miami--the Cuban exile community. There's also a lot of really rich folks down here, and they're not all about helping out the dirty unwashed who clean their floors and wash their cars.

But I love the right column, which has what looks like a misspelling of "dummies" and the letters BJ as part of the list of offenses that Democrats commit against the country.

Sometimes it's too easy.