I've lived most of my life in the south, and so have had the opportunity to sample most of what's considered standard cuisine down here. We eat some weird shit. For instance, anywhere else in the US, crawfish is bait, but Louisianians love to boil them up with whatever's handy (as long as there's lots of cayenne involved) and not only eat the tails while they're scalding hot (mid-summer to boot), but we suck the "juice" out of the heads too. Catfish, a bottom feeder, is the most common fish we eat. And no meal is complete without some manner of gravy.

I've covered this topic before when discussing the hamdog and the Luther Burger (later memorialized in the cartoon "The Boondocks"), and Grim has a whole series on nasty looking snack foods (which often live up to their billing in terms of taste as well). But Amy showed me this abomination. 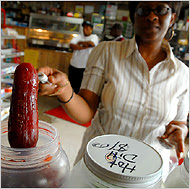 Chew on that image for a bit. Let it really sink in. A Kool-Aid dill pickle.

Now I'm a pickle fan, and have been since I was a kid. I love all varieties--kosher dills, hot and spicy, sweet gherkins, bread and butter dills. I even used to fight with my sister over who would get to drink the pickle brine when we finished off a jar. But the Kool-Aid pickle is just wrong. As John Edge, the reporter in the above piece puts it, "Kool-Aid pickles violate tradition, maybe even propriety." I'm no stick-in-the-mud, and I'm certainly willing to try new things, but I have to draw a line somewhere, and on this side of the line, there's no way I'm ever eating a Kool-Aid pickle.