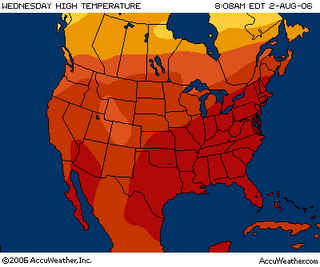 The world will go out with neither a bang nor a whimper, but with an argument about whether or not the world is going out.

Or whether this is part of a natural "cycle."

The "hurricane cycle" particularly amuses me: yes, there were a lot of hurricanes in the early 20th Century. But tell me, when was the "cycle" before that? And since greenhouse gasses were spewed into the atmosphere much MORE at the beginning of the industrial age than they were, say, post environmental legistlation, why is a shitstorm of hurricanes in the early 20th C evidence "against" greenhouse gasses making hurricanes worse? Seems to me that it fits the pattern right well, and that the lull in hurricanes that fell during our more "environmental" years might better reflect natural "cycles," or at least a possible plan of action to reduce the number of storms.

But I am no tree hugger. I'm a man-hugger. Save the humans is my motto. These temperatures kill our elderly indoors and young athletes outdoors. They raise the demand for energy, and that means more war. Why would a species knowingly kill itself? No bang, no whimper, just a tortured rationalization. No end in sight.