And now we wait

This is the boring time. Everything is inside that needs to be inside for a storm of this size. The main shutter is down. The flashlights and candles are handy, the freezer is packed full with food and ice, and the gallon jugs of water are filled in case we need them. Here's hoping the storm is as small as it looks on the radar screens.

Of course, most of the stories on the news today are all Katrina retrospectives. I've been ignoring them, largely because I don't need tv to remind me of the devastation Katrina wrought. My daughter has lived with me for the last year because of it, and she'll be returning this weekend, should Ernesto pass the way he's supposed to.

Plus, I was in New Orleans and the Northshore just about 6 weeks ago. I saw it firsthand. I took a few pictures, but stopped because it was too painful. It was like seeing your cousins after they got into a car wreck. They're hurt and there's nothing you can do to fix it, and what's worse, the people at fault are connected and will never be held to account or be forced to make it right. The people living there are affected most of all, no question, but it hurts to be removed from what was your home and know that it's never going to be made right, that the people who made the promises that locals would be given every assistance are allowed to lie without consequence, without repercussion.

These are two of the pictures I took while in Slidell. The first is the sign outside my high school, bent but still standing. The school has been bulldozed and is being rebuilt. The second is of a house on Rats Nest road, just off Lake Pontchartrain, destroyed by the storm surge, no doubt. A year later and there are more houses that look like that than look like repairs or reconstruction have begun. Along Highway 11, I saw a car, ass end hanging off a dock, nose plunged into the dirt; a 30 foot shrimp boat stuck in a tree; pilings jutting out of the water, their houses who know's where.

Ernesto will affect many still left unwhole from Wilma last year, but the devastation should not be as significant. This is a small storm, and Cuba took a lot out of it, but there will be people, roofs covered with blue tarps, who will be damaged again, and they'll be dependent on government assistance to make them whole, because insurance companies have made it clear that they won't help, unless you have the money to make them fight. And I fear our government will leave them wanting, yet again. 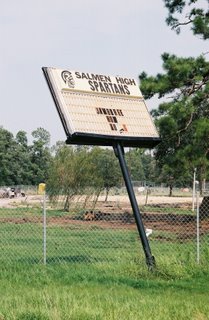 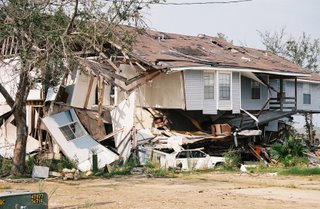