More photos
One of the drags about being a former Jehovah's Witness is the fact that your family members who are still Witnesses are supposed to disown you, for all practical purposes. It's not quite as severe as I hear the Mormon excommunication is--the Witnesses don't tell you to, or even encourage you to divorce your no-longer-Witness spouse--but your family is supposed to have little or no non-essential contact with you.

My sister and I have been on both sides of this--I was a Witness when she was disfellowshipped, and she was a Witness when I left the church. We both broke the rules about cutting each other off. We both felt that there were times when the church was misguided. We've stayed tight, and now that we live closer together--about a day's drive apart--hopefully we'll get to see each other more often.

That's her in the picture below, and her son, my nephew Cameron. He's a Spiderman fan, and has come shining through some pretty serious health problems when he was much younger. 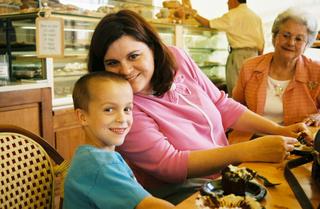 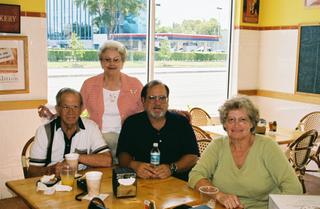 And then there are some relatives who either aren't Witnesses, or who aren't letting it stop them from staying in touch with family. The older two are my grandparents (grandfather and second wife, but she's been around so long now she's family), and the younger two are my uncle Dan and his wife, my aunt Betty. Dan owned the first computer I ever played on, an old TI 99/4A, complete with tape deck drive hooked up to a little 13 inch tv, and I've been a gadget freak ever since then. Dan and Betty live in Pompano, not far from here, and it was good to see them again. It had been far too long--twenty years at least--since I'd seen any of them.

It's not going to happen again.

You see, it's easy to lose track of people when you actually believe you're going to live forever, or that if either you or they die, that you'll see them again after resurrection into a paradise.

But I'm not counting on that anymore.

My relationship with my parents seems to have improved somewhat in the last couple of years, since my dad's health has been touchy. I got to visit with them for a short period when I drove through Texas on my way to Florida this summer, and I heard from them right after Katrina. I'll take what I can get.