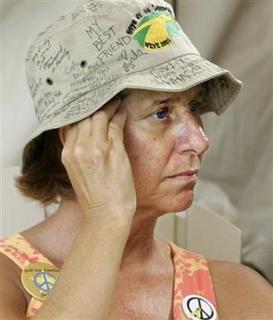 Kos's place is where the real heavy lifting on this story is going on--there are locals and people who have traveled to Crawford, TX who are basically live-blogging and checking in with phone calls to keep everyone updated. I'd post a link, but the diaries updating the situation hit the top of the recommended list as quickly as they hit the main list.

Here's the basics for those who haven't heard the story. Cindy Sheehan lost her son in the Iraq war--he was on one of the WMD teams. She and a group of other people have traveled to Crawford TX to ask the vacationing King George the Lesser why her son had to die. King George, of course, won't have anything to do with this, and the pressure has been mounting to get her out of there before the regular news media decides this is a real story and starts asking unpopular questions.

According to the bloggers on the scene, here's what has happened thus far. A Republican legislator has suggested--not threatened, but suggested--that Sheehan and the people with her might be arrested as national security threats. The local sheriff has apparently told the group that they have to vacate any part of personal property that they're touching, and has closed down the road they're on so people can't resupply Sheehan with water or food. This is Texas in August, folks--that's potentially deadly. If this comes down to an open confrontation or someone winds up in the hospital, the bad press will be more than avoiding Sheehan is worth.

Pressure is building on the mainstream media, just like it did with the Downing Street Minutes, and with a little more effort, we just might get some major coverage out of this.

UPDATE: You can read Sheehan's accounts of the day's events here. She's basically staying that she's staying until Bush comes out and talks to her, she gets arrested, or August ends. Brave woman.