I believe that Alice's Adventures in Wonderland is the purest fiction ever devised. And when I say "pure" I mean that it is centered directly and wholly in the genre of fiction. Most stories wander into poetry from time to time, and dance rhythmically around in the domain of drama. But Alice in Wonderland is fiction, pure fiction.

My test for this is translation. Translation is a trial by fire for any work of art; translation is the Darwinian test. A novel that can be translated into drama, into film perfectly or even near-perfectly, no longer needs to exist. It has evolved into a preferred form, a form more likely to survive in our current cultural ecosystem.
My favorite examples: Breakfast at Tiffany's. Midnight Cowboy. In both cases the book is better, but in both cases, for most people, the movie is good enough.
These two novels were replaced in our cultural consciousness by the movies made from them because at their hearts both stories are dramas about characters and events.
To me, "pure" fiction is distinguished from dramatic fiction or prose-told drama by its uncompromising allegiance to ideas. A fiction will violate all good dramatic standards of character and plot and sense itself to communicate its ideas.
Most everyone knows that Lewis Carroll/Charles Dodgson was a mathematician, and I think this recent NYTimes Op-Ed does a great job of explaining to we lay-people how Dodgson's Alice wandered through a wonderland of ideas -- of mathematical concepts he brought to life through fiction.
There are have been more than two dozen attempts to turn Alice into a film, and while some have had more impact than others, none has ever threatened to replace the fiction, the prose as Dodgson wrote it. I believe none ever will: because film shows drama, and this story doesn't dance in dramaland, it frolics in fictionland, Wonderland, the land of questions unanswered, the land of nonsequiturs more true than sense, the land where ideas and concepts and abstractions come to life.
The single most amazing thing about mathematics is that, while the world of numbers appears to be entirely man-made, math describes our real, actual, natural world better than anything else. One, two, three, four -- these neat, discrete units of precise size and order are themselves ideas and ideals (in the platonic sense), concepts, abstractions. And yet: everything around us can be described through these strange little creatures that seem very much to be an invention and yet indicate at every turn that they are instead a discovery of something fundamental and (literally) universal.
It seems that the more dedicated we become to describing the world in terms of empirical fact, the more necessary these abstract ideals become. And it seems that the deeper we go into the misty magic land of these numbers themselves, the closer we come to that everyday complexity that seems to belie the cleanliness of a mathematical approach.
Consider the art of Nathan Selikoff: I've been considering it for days, ever since I met Nathan at an artists' workshop last weekend. 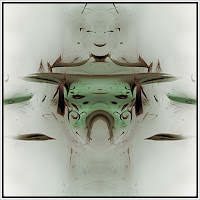 You're looking at "Chinese Warrior," a fraction of a much larger work, called "Faces of Chaos." Selikoff produced numerous images based on complex math, then sorted through the images, selecting 1024 that looked like things we could recognize. This is something like watching clouds, and making out shapes, only with much more discernible detail, and with absolute clarity on what numbers and what processes created the image. 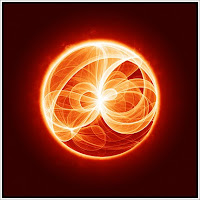 This piece is called "Helios," (not to speak for the artist, but, very likely) because it looks like the sun. It's part of a separate project called "Strange Attractors," but it shows a similar idea: simple math gives us spheres and cubes and triangles, sure, but when the math gets complex enough, the images seem to leave that world of ideals and take a place in our real world: it looks like the sun not just because it is round and seemingly-spherical; there's more discernible detail than that: 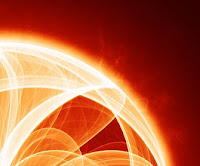 This is a detail of "Helios" I made from a screen grab of the image on Selikoff's website: the seeming-sphere seems to have a surface, as you can see, and something seems to be radiating from it, some kind of dusty liquid heat -- a plasma. We see this image and recognize other images we've seen... 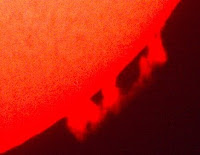 ...like this actual image of the surface of the sun. And the most astonishing thing of all is that the image produced by an artist through mathematics is more clear and detailed than the image made through optics by a scientist.
I look again at Selikoff's image and I ask myself: do the numbers tell us more than our eyes and instruments? Can the mathematical models predict the physical nature of the universe? Sure, this image looks like a Chinese Warrior, and this one looks like a star, but what about all those others? What other shapes exist in the universe that we do not recognize because we have not yet seen them?
I look again at "Helios," at the ribbons of energy that move "within" the "sphere" and I wonder if these lines tell us something about the movement of energy within a star that it may take scientists decades or centuries to confirm? We know numbers are useful in describing the world we understand, because we understand it; we can compare. But what about all those numbers who are useful in describing the world we do not yet know?
What Wonderland can they reveal? Only the Artist-Mathematicians like Dodgson and Selikoff can show, and tell.
This is the second in a series of posts on Florida Artists, and how I experience their work. I would love references to more artists, working in any medium, in Florida.
Cross-posted to The Electronic Girl