Owning a piece of history 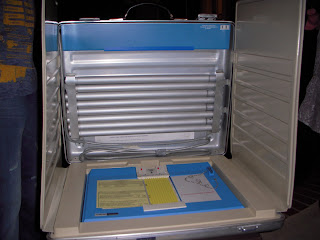 Amy's brother-in-law just bought this beauty--an official Broward County punch card voting machine that was used during the 2000 election. The hanging chad machine. I know--it feels like a lifetime ago, and in some ways, it was. This machine and its mates added to the drama that resulted in the first ever Presidential election that was decided 5-4.

The voting machine is only a small part of that story, of course. Had Jeb! Bush and Katherine Harris not pulled their massive voter purge earlier that year, the chad debate would never have happened, as Gore would have won handily. Had Republican interns flown in from around the country disguised as concerned local voters not interrupted the recounts in Dade county, had a Democratic party chair in Palm Beach county not approved a poorly designed butterfly ballot, had the national media done due diligence on a certain governor from Texas while holding back from making stuff up about a sitting vice-president, then this little piece of history probably stays obscure because there's never a Bush v. Gore for the Supreme Court to hear, much less to spawn one of the most intellectually dishonest and indefensible rulings in our nation's history.

It was an odd feeling last night when Rob pulled this thing out to show us, just 19 days away from the inauguration that will signal an official end to the Bush administration (although we'll be feeling the effects for some time to come). Trying to imagine what things would have been like under President Gore in 2001 is tough--so many variables, so many possibilities. What would a hostile Congress in charge of both Houses have done to Gore? Would they have even waited until the midterms to drum up some crap impeachment charges? Would the 9/11 attacks have happened, or would a national security apparatus looking closely for the dangers have rolled up the terrorists before they boarded those planes? Or what if there had only been partial success, and one or two planes leaked through?

Hosts of other issues as well--where would we be on climate control legislation? Health care reform? Would Gore have won re-election in 2004? Would Barack Obama even be a junior Senator from Illinois at this point? Would Joe Lieberman be as reviled among Democratic party activists as he is? Would anyone know who Howard Dean was? How would the netroots have come together--or would they at all?

That's only the tip of the iceberg of questions. All those possible futures wrapped up in that aluminum case, those chads, that push pin. And something almost as cool about it? He's got something that the Smithsonian has in its collection. That makes almost any Christmas present he could have gotten look like a booger, doesn't it?