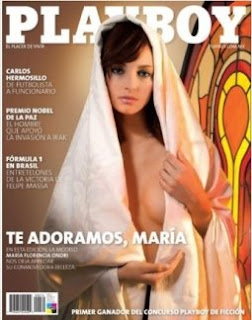 Rick Sanchez is mad at Playboy. Or at least, he's reading Twitter feeds in an outraged voice, according to Riptide.

Let's be clear here--Playboy knew what it was doing when it took that picture and put it on the cover. There's no question that they were invoking Catholic imagery--even the title plays on the idea of adoration, for crying out loud. But I think the Catholics who are part of the outrage industry really missed an opportunity here.

See, I think a smart Catholic would point to the words of Jesus, who said (and I'm paraphrasing here), "You will be objects of ridicule on account of my name," and say something like "Playboy's treatment of our holy symbols is a sign that we're doing God's work." Of course, I'm an atheist, so what do I know about this sort of thing.

The thing most Christian religions have forgotten is that their churches were born out of powerlessness. Most major Christian sects were persecuted at some point in their histories, so response to ridicule was a large part of how they built their faith base. The big churches, however, have forgotten what that was like, because they've been the power for so long--they just get offended because someone has dared to tweak them a little. That's what happens when you evolve from revolution to governance--it's not so much fun when the barbs are being tossed at you instead of you tossing the barbs.

Of course, for people in the outrage industry, that's a losing proposition. There's not as much money in turning the other cheek as there is in stamping their feet.